Ring Of Fire Rocked By Earthquakes, Is California In Store For The 'Big One'? 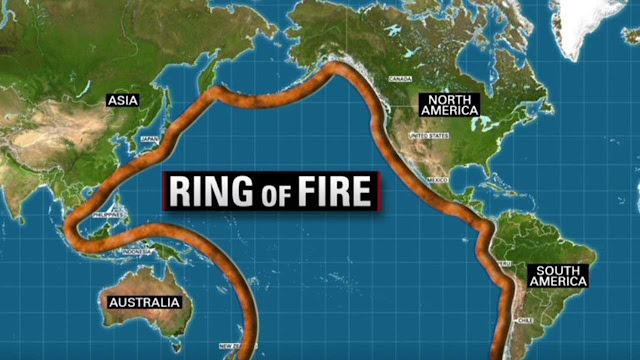 This August is shaping up to be a pretty shaky month, thanks to several large earthquakes across the globe. These earthquakes have spurred reports that California is more likely to experience a catastrophic earthquake, colloquially known as "the big one," very soon. But experts say that's not how earthquakes work.

In the past three weeks, there have been eight earthquakes that were magnitude 6.5 or greater. That's 40 percent of the major quakes that have happened so far this year, according to the U.S. Geological Survey (USGS). Yesterday morning (Aug. 22), a magnitude-6.2 earthquake occurred about 170 miles (273 kilometers) off the coast of Oregon, along the Blanco Fractal Zone (separate from the San Andreas Fault in California), USGS reported.

But don't worry — the occurence of these earthquakes doesn't suggest that there's a higher chance now, compared with any other time, that California will experience a major earthquake.

"I have not heard of any seismologists who fear that California is about to experience 'the big one,'" said Jascha Polet, a seismologist at California State Polytechnic University, Pomona. "In the past few days, there have been more large earthquakes (globally) than on average, but that will happen in any random distribution," Polet told Live Science in an email.

Seven of this month's eight monster shakers occurred around the Ring of Fire, or the Circum-Pacific Belt. This region is the horseshoe-shaped border of the Pacific Ocean where about 90 percent of the world's earthquakes occur, according to the USGS.

California is included on the eastern side of the ring, and so far, the state has been spared significant earthquake activity in the past few months. In the past 30 days, the largest quake was a magnitude 4.5, which occurred July 25, 65 miles (105 km) off the coast of northern California.

Although there are regions, such as the Ring of Fire that are more prone to seismic activity than others, earthquakes are discreet events that occur randomly and independently of one another over time. The recent increase in seismic activity after an apparent lull is exactly what seismologists expect. "In a random distribution, there will be periods of low and high activity," Polet said.

Major earthquakes can shift the underlying stress on that particular fault, which, in turn, may change the likelihood of later quakes in the area around the fault. For instance, large earthquakes typically result in aftershocks, or smaller earthquakes in the same area of the main earthquake. "These aftershocks will decrease in size and frequency as time goes by and the fault settles in," said Kasey Aderhold, a seismologist with the Incorporated Research Institutions for Seismology, a nonprofit research organization.

"The larger the earthquake, the longer it takes to settle back down to the usual background seismic activity," she said. Aderhold also explained that the largest earthquakes, like the magnitude-9.1 Tohoku earthquake off the coast of Japan will have aftershocks for years to come.

California has a history of experiencing large earthquakes, such as the magnitude-7.8 earthquake that rocked San Francisco in 1906 and the magnitude-6.9 Loma Prieta earthquake in 1989 that caused 63 deaths and thousands of injuries, according to the USGS. Because many years have passed without a major California quake, some news outlets have speculated that the chance of a devastating quake occurring in California is higher now, considering the recent increase in earthquake events around the Ring of Fire.

"We have had other large earthquakes that did not trigger the 'big one,'" Aderhold told Live Science in an email. For example, she said, "the 2004 [magnitude] 9.2 Sumatra earthquake made everywhere on Earth move by at least 1 centimeter [2.5 inches]," but there was no West Coast "big one." Aderhold also pointed to the 2011 magnitude-9.1 Tohoku earthquake off the coast of Japan and the 2017 magnitude-8.2 Chiapas, Mexico, earthquake, neither of which spurred a large earthquake in California.

According to the USGS, the southern California area experiences about 10,000 earthquakes every year, although most are so small that people don't even feel them. But this doesn't mean Californians shouldn't be prepared for more destructive earthquakes.

The USGS predicts that, within the next 30 years, the probability of at least one magnitude-6.7 or higher earthquake is 60 percent in the Los Angeles area and 72 percent in the San Francisco Bay area.

"The bottom line is that a large and potentially damaging earthquake will occur in California and other locations in the world, and communities should continue to review and improve their preparations and plans," Aderhold said. "Big earthquakes elsewhere are a good reminder."

The USGS recommends setting aside emergency supplies such as a first-aid kit, medications and a fire extinguisher. You can find the full list of items, and other helpful tips for earthquake preparedness, on the USGS website.