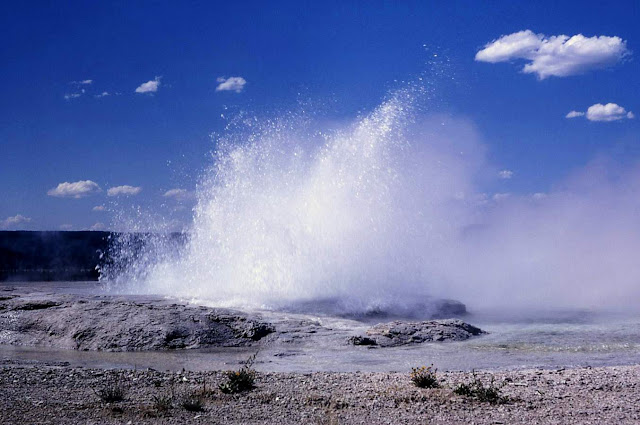 On Sept. 15, Yellowstone National Park's Ear Spring geyser erupted in its most violent display since 1957. For several minutes, sprays of steaming water leapt up to 30 feet (9 meters) in the air, chunks of rock and dirt spewed forth onto the ground and about 60 years of wishes were promptly reversed when the geyser gave up nearly 100 coins that had previously been tossed in.

Some coins were to be expected: Who among us hasn't flipped a good-luck penny into a thermal vent? But park officials were more surprised to find that decades of man-made garbage had also burst forth from Ear Spring — some of which dated back to the 1930s.

"After Ear Spring erupted on September 15, employees found a strange assortment of items strewn across the landscape around its vent," officials wrote on the Yellowstone National Park Facebook page. "Some are clearly historic: they'll be inventoried by curators and may end up in Yellowstone's archives."

What have people been throwing into the geyser? Some of the historical detritus that Ear Spring coughed up includes a large chunk of cinderblock, a broken bottle, several metal warning signs, some old aluminum cans, plastic cups, cigarette butts, someone's rubber heel insert, a vintage pacifier from the 1930s and an 8-inch-long (20 centimeters) plastic drinking straw. (Editor's note: please do not try to drink a geyser.)

Whether these foreign objects were dropped into the geyser accidentally or chucked in on purpose makes no difference. Either way, park officials wrote, it's bad for the geyser.

"Foreign objects can damage hot springs and geysers," park officials wrote on Facebook. "The next time Ear Spring erupts we hope it's nothing but natural rocks and water."

According to the U.S. Geological Survey (USGS), Ear Spring has erupted four times in the last 60 years, most recently in 2004. The geyser is located on Yellowstone's Geyser Hill, not far from the world-famous gusher Old Faithful. Several other geysers and thermal pools showed increased activity around the time of Ear Spring's eruption: For instance, a brand-new vent popped up and erupted overnight between Sept. 18 and 19.

"An approximately 8-foot [2.4 m] diameter area of surrounding ground is 'breathing' – rising and falling by about six inches [15 cm] every 10 minutes," USGS experts wrote in a news release.

This increased hydrothermal activity could last anywhere from a few days to several years, the USGS wrote. It could also result in a "small hydrothermal explosion" that would carve out a shallow crater on Geyser Hill while spewing jets of boiling water and rocks hundreds of feet in the air.

This is all to say, if you have been meaning to dispose of your old cinder block or vintage baby gear collection in a Yellowstone geyser, now is not the time.
Share to: