Yellowstone Volcano Was Hit by Earthquake Swarm of 2,500 Tremors 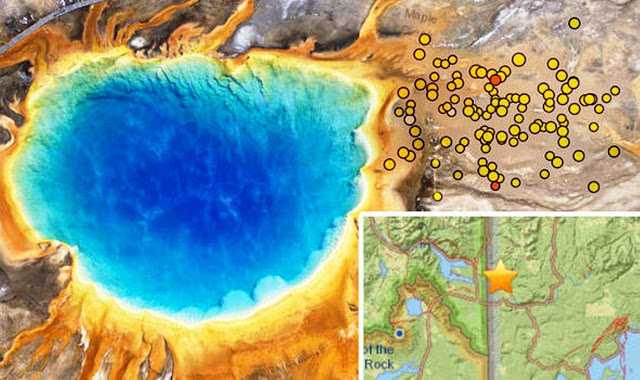 Last summer, Yellowstone National Park was hit by a huge earthquake swarm. Over the course of three months, the park experienced over 2,500 tremors, making it one of the biggest and longest swarms on record.

Earthquake swarms are completely normal. They account for about 50 percent of the seismic activity in the Yellowstone area. Last month, for example, seismologists recorded 126 earthquakes in the National Park, 57 of which were part of a swarm in an area known as Maple Creek.

This is the same area that the mega-swarm of 2017 took place. It started at the western edge of Yellowstone National Park in June and persisted for three and a half months, coming to an end at the start of October. What caused the earthquake swarm is not known.

At the time, Mike Poland, the scientist-in-charge at the U.S. Geological Survey’s Yellowstone Volcano Observatory, said that after the swarm ended, scientists would be able to “gather up all of the available data and start crunching numbers.

"[This is] certainly a fascinating event and one that we hope to learn more about through some post-swarm analysis. There's a lot to work on this winter, for sure."

Now, scientists at the USGS believe they have determined the driving force behind the event. David Shelly, seismologist with the government agency, wrote a blog post about what they had found in the Yellowstone Caldera Chronicles.

He said that recent upgrades to the seismic network at the park meant the swarm had been captured in incredible detail. Scientists had more data to work with than ever before. The team compared the waveforms of thousands of earthquakes in order to precisely locate each tremor. This allowed them to build up a map showing how the swarm moved.

“The patterns of seismicity from the swarm in time and space that have been revealed from this processing are striking—the swarm involved numerous fault structures over its course,” Shelly wrote. “Many of these faults are parallel and oriented along east-northeast trends, but some faults with orientations that are nearly perpendicular to that trend were also activated. Over the 3 months of the swarm, seismicity migrated outward from its initial activation area, both laterally and in depth. At times, this migration was rapid; at other times it was slow.”

He said the pattern observed does not fit with the movement of magma. Instead, it looks like the swarm was caused by “water…diffusing through small cracks in the subsurface.”

Shelly continued: “The involvement of this water may in part explain why these swarms are sometimes long-lived, why they expand dramatically over time, and why the fault structures are so complex. This also may explain why swarms are common in volcanic areas, where water is a byproduct released from deeper magma as it cools.

“Because this water is under great pressure in the deep crust where it is released, it tends to migrate upward and sometimes laterally. When it interacts with cooler, more brittle rocks stressed by tectonic and volcanic processes, this water may trigger earthquakes. In fact, earthquakes themselves may allow the fluid to migrate more efficiently, through faults in the rock.”

He said that while the swarm of 2017 was “a larger-than-average example,” earthquake swarms on their own—without signs of unrest, like surface deformation or changes to gas emissions—do not signal an increased risk of eruption.


The above story is based on materials provided by USGS.
Share to: