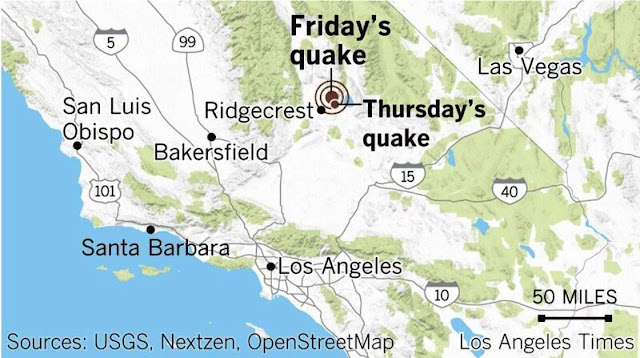 The quake was centered near Ridgecrest, the location of the July Fourth 6.4 magnitude temblor that was the largest in nearly 20 years. It was followed by an aftershock first reported as 5.5 in magnitude. Scientists said the fault causing the quakes appears to be growing.

Friday night’s quake caused some fires and other damage in and around Ridgecrest and Trona, two Mojave Desert towns shaken by both quakes, said Mark Ghilarducci, director of the California Governor's Office of Emergency Services. The quake was felt as far away as Phoenix, Las Vegas, Baja California and Reno, according to crowd-sourced data logged into the U.S. Geological Survey’s Did You Feel It? website.

About 3,000 residents in Ridgecrest and the surrounding areas are without power after the earthquake, according to Southern California Edison. In Los Angeles, there were no immediate reports of major damage to buildings and infrastructure, according to the Los Angeles Fire Department.

In Trona and Ridgecrest, residents answered their phones frantically and in fear.

“They’re saying the ground split,” said Winter Wilson, who was driving home to Trona from Bakersfield, her voice shaking. “They made me promise not to come.”

Trona resident Ivan Amerson said he had heard reports from neighbors there was “significant damage” to the town, with houses knocked off their foundations. Amerson evacuated with his family after the first quake and was unsure he could quickly get back, given reports that roads to the town were impassable. New cracks and rockslides closed Highway 178 between the two towns, after damage had been repaired following Thursday’s quake, Caltrans reported.

Ghilarducci said Trona, home to about 2,000 people, reportedly sustained collapsed buildings and gas leaks. Power and communication are out, and the outages have made it difficult for first responders to determine the extent of the damage. “We know that as day breaks, we’ll be able to get a better assessment of the total damage,” he said.

Ghilarducci added that priorities will be to provide support for medical and firefighting needs, as well as trying to get power back on. Maj. Gen. David Baldwin, adjutant general of the California National Guard, said a joint task force that will include 200 security forces and military aircraft will be sent to assist.

The 7.1 quake that struck at about 8:20 p.m. Friday night was about 10 times larger than the one on Thursday morning, Caltech seismologist Lucy Jones said.

The Friday quake occurred on the same fault system as the 6.4 temblor. It was farther away from Los Angeles, though still in the Owens Valley.

“This happened at the end of the zone that moved previously,” Jones said, adding that the fault is now likely to be 25 to 30 miles long.

Given its size, it’s likely to be followed by more shaking that will be felt in Los Angeles.

“The largest aftershock, on average, to a 7.1 would be a magnitude 6,” Jones said. That means that another quake on the order of Thursday’s 6.4 temblor “would not be surprising to anybody.”

Or it could be even bigger.

Jones said she could not recall a pattern of earthquakes in California where a 6.4 foreshock was followed by a 7.1 event, only to be followed by an even bigger quake.

But that doesn’t mean it can’t happen, she cautioned.

“It is clearly a very energetic sequence, so there’s no reason to think we can’t have more large earthquakes,” she said.