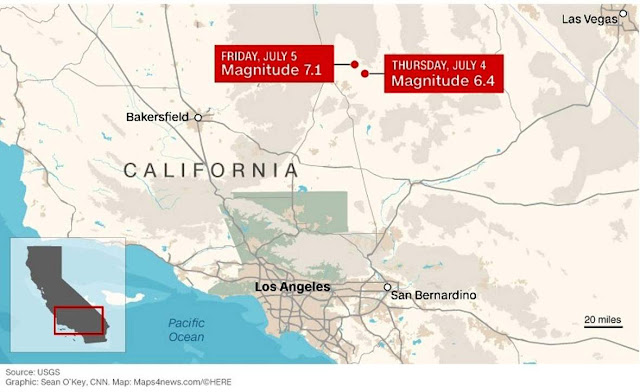 The foreshock originated along a strike-slip fault in the Eastern California Shear Zone, a region frequented by earthquake swarms, near the edge of Death Valley National Park. The rupture occurred along a 10 mi (16 km) section of an unspecified fault line. Earth on either side of the fault was deformed, with lateral shifts of 6–8 in (15–20 cm) in the immediate vicinity.

As darkness fell on Friday, the magnitude 7.1 tremor rocked the Mojave desert town of Ridgecrest near Death Valley National Park, jolting the area with eight times more force than a 6.4 quake that struck the same area 34 hours earlier.

Southern California can expect more significant shaking in the near future, said Lucy Jones, a seismologist at the California Institute of Technology and a former science adviser at the US Geological Survey.

There is about a one in 10 chance that another 7.0 quake could hit within the next week and the chance of a 5.0-magnitude quake “is approaching certainty”, Jones told reporters, adding that the new quake probably ruptured along about 25 miles of fault line and was part of a continuing sequence.


Jones told the LA Times the fault that caused the quakes appears to be growing.

“This happened at the end of the zone that moved previously,” Jones said, adding that the fault is now 25 to 30 miles long.

At a late-night news conference, OES director Mark Ghilarducci said: “We have significant reports of fires, structural fires, mostly as a result of gas leaks or gas line breaks.”

The quake caused water main breaks and knocked out power and communications to parts of Ridgecrest, a city of about 27,000 about 125 miles north-east of Los Angeles. No fatalities or serious injuries were reported, police said. But Ghilarducci said the full damage would not be known until Saturday.

“This was a very large earthquake, and we also know there’s going to be a series of aftershocks as a result of the main quake,” he said, adding his agency faced a “challenge” getting needed resources to the isolated quake zone.

In the hours after the 7.1 tremor, seismologists recorded more than 600 aftershocks. The quakes were not expected to trigger larger faults including the San Andreas.

Ridgecrest residents were still recovering from Thursday’s quake. Most damage came from ruptured gas lines. About 3,000 people were left without power, according to Southern California Edison. Many said they would sleep outside than risk staying in their homes.

A rockslide closed state route 178 in Kern River Canyon, where photos from witnesses showed that a stretch of roadway had sunk. Megan Person, director of communications for the Kern county fire department, said the county had opened a shelter.

As far away as Las Vegas, players and staff left the court after the earthquake was felt during an NBA summer league game between the New York Knicks and the New Orleans Pelicans. The US Geological Survey said it was felt in Mexico too.


Communities in the Mojave were assessing damage after Thursday’s quake, which set fires and opened three cracks across a short stretch of state route 178 near the tiny town of Trona, said California transportation spokeswoman Christine Knadler. Bridges were being checked.

The quakes were the most powerful in the region since 1994, when the 6.7 magnitude Northridge quake hit the heavily populated San Fernando Valley, causing 57 deaths and billions in dollars of damages.