Will the Southern California Earthquakes Cause Yellowstone to Erupt? 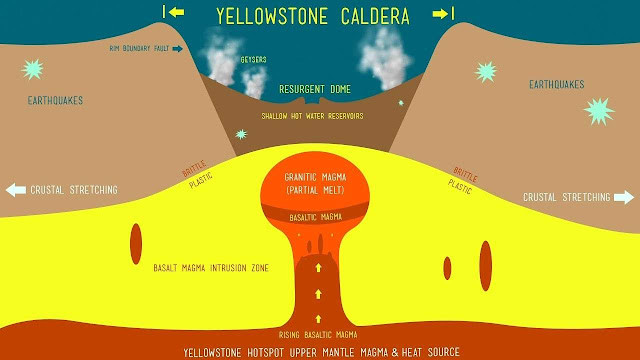 With the two strong earthquakes in southern California these past few days—a M6.4 on July 4 and a M7.1 a day later—it's a natural question: Will these earthquakes trigger volcanic eruptions? Including perhaps at Yellowstone? There was apparently a spike in Internet searches on this very question, so we thought it would be a good idea to address it up front in this week's edition of Yellowstone Caldera Chronicles.

If you want the short version of the story, here it is: Earthquakes like those of the past week are unlikely to trigger volcanic eruptions, although they might trigger microearthquakes at some volcanoes.

Now for the long version of the story. Let's start with some historical perspective. M6-7 earthquakes are, unfortunately, pretty common occurrences in the western United States. Since 1900, in the continental USA there have nearly 100 earthquakes greater than M6, and there have been 9 greater than M7 (both of these numbers go up if you include Canada and Mexico). Most of these events are in California, but they have also occurred in Oregon, Washington, Nevada, Utah, Idaho, Montana, and Wyoming. If we assume that rate is representative of the average, that means there would be about 10 M7+ events per century in the western USA.

Yellowstone has not erupted in 70,000 years, and that was a lava flow, not an explosive eruption. That means there might have been something like 7000 M7+ earthquakes in that time period. None caused Yellowstone to erupt.

Using a simple dose of common sense, we can see this is the case just from recent history. In 1992, there was a M7.3 quake—the Landers earthquake—about 25 miles (40 km) north of Palm Springs in southern California. And in 1999, there was an M7.1 event—the Hector Mine earthquake—about 55 miles (90 km) north of Palm Springs. Neither of these caused an eruption, in Yellowstone or anywhere elsewhere—not at Coso (in California, near Ridgecrest, the site of the recent strong earthquakes), not at Long Valley caldera (in eastern California, near Mammoth), and so forth.

Proximity to Yellowstone doesn't matter. In 1959, the M7.3 Hebgen Lake earthquake occurred right on the Montana-Idaho border, essentially on the western boundary of Yellowstone National Park. And of course, there was no eruption.

But it's not as if strong earthquakes don't have any impact at all on the volcanoes of the United States. They sometimes do. Just not in ways that are obvious.

You might ask, how do we know that the smaller quakes are triggered by the larger quake? Good question! Based on seismic data, we can see that these smaller quakes start at the same time as the waves from the distant large earthquake arrive. Some of these triggered swarms have lasted for days.

The next logical question is: What do these triggered quakes mean? There are a few possible explanations. It might be that the seismic waves from the distant strong earthquake cause water and gas—fluids that might come from magma reservoirs—to move around beneath the ground. As the fluids move in the subsurface, they cause rock to break. Presto! Small earthquakes! Another possibility is that passing seismic waves cause small increases in fluid pressure. Since hydrothermal systems are already at a critical pressure (which is why there are geysers), any small increase can cause microfractures, and thus small earthquakes. Probably both possibilities are true, and act in different ways at different volcanoes.

Large earthquakes can also cause changes in hydrothermal systems, like Yellowstone's geysers. The 1959 Hebgen Lake earthquake was the most striking in this regard. Within a day of that earthquake, at least 289 springs in Yellowstone had erupted as geysers, and 160 of these were springs with no previous record of eruption! Even after the 2002 Denali, Alaska, earthquake, some geysers changed their patterns, erupting more, or less, frequently. But not every geyser was affected—some, like Old Faithful, did not seem to feel the earthquake at all. This fickle response is a testament to the fragile nature of geyser plumbing systems.

So strong earthquakes can indeed have an impact on volcanoes. But triggering eruptions? That's not common, especially in the mainland USA, where hundreds of M7+ events have clearly had no impact on volcanoes like Yellowstone, Long Valley, Coso, and elsewhere.