What Happens Under the Yellowstone Volcano? 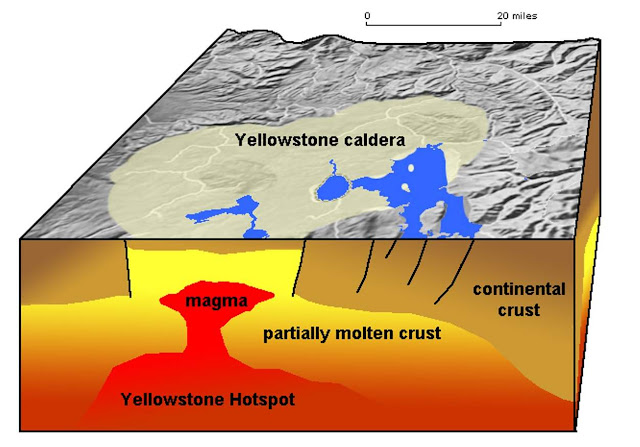 The Yellowstone National Park in the USA with its geysers and hot springs is a great attraction for tourists. However, especially in times of little news, the media often focusses on the Yellowstone Supervolcano, which last erupted about 630,000 years ago.

Inevitably, then the question of the underlying geological structures will be posed. A recent study by Bernhard Steinberger of the German GeoForschungsZentrum and colleagues in the USA helps to better understand the processes in the Earth's interior. The paper will soon appear in the journal "Geochemistry, Geophysics, Geosystems" published by the American Geophysical Union. It is based on modelling the Earth's mantle.

According to the model, beneath the Yellowstone volcano lies a so-called mantle plume: a chimney-like structure that reaches thousands of kilometres deep to the border of the Earth's core and mantle. The origin of the plume lies under the "Baja California," more than a thousand kilometers southwest of the national park. Evaluations of earthquake waves had already suggested something like this, but the idea of such a "mantle plume" did not fit in with the movement of the Earth's lithospheric plates.

It is clear that Yellowstone is a so-called intraplate volcano. Most volcanoes in the world are located at the borders of continental plates, either where material from the Earth's interior rises, as in Iceland, or where one continental plate submerges under the other and melts, as is the case along the American westcoast.

In contrast to plate boundary volcanism, intraplate volcanism goes back to "hotspots" under the Earth's crust. This can be imagined as a welding torch that melts the lithosphere from below -- where a hole is virtually burned through, a volcano grows. This is how Hawaii, for example, came into being.

The seismic data for Yellowstone, however, did not provide a clear picture for a long time. This has changed due to new data and refined measurement methods, which have allowed the deeper part of the plume to be imaged in a tomographic image. However, gaps remain in the upper mantle.

The data were not so clear here. The study from the GFZ now fills these gaps with a modelling result that maps the mantle plume consistently with the observation data. Accordingly, there are slow movements of the rock in the lower mantle of the Earth, which are directed southwest relative to the surface.


The above story is based on Materials provided by GFZ GeoForschungsZentrum Potsdam, Helmholtz Centre.
Share to: