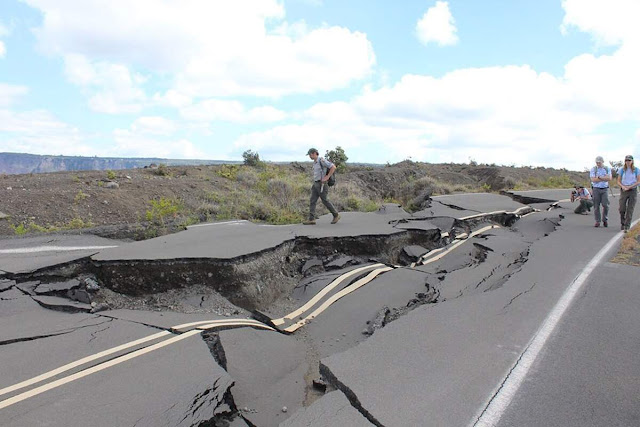 You’re probably familiar with earthquakes as relatively short, sharp shocks that can shake the ground, topple buildings and tear rips in the Earth. These earthquakes, and their aftershocks, happen because although tectonic plates move at centimetres per year, this motion is seldom steady. Earthquakes result from a “stick-slip” motion, where rocks “stick” along fault planes while stress accumulates until a “slip” occurs – a bit like pulling on a stuck door until it suddenly opens. This slip also releases energy as the seismic waves that, in large magnitude earthquakes, create substantial damage.

In the last two decades another class of stick-slip motion has been discovered worldwide. These “slow slip events” last for weeks to months, compared to seconds to minutes for earthquakes. Slow slip events occur faster than average plate motion, but too slow to generate measurable seismic waves. This means they need to be studied by GPS networks rather then seismometers.

Although their motion is slow, the amount of movement that occurs in a slow slip event is substantial. Earthquake magnitude depends on the distance that rocks move and the area this movement occurs over. Using the same definition, many slow slip events would have had magnitudes above 7.0 if they slipped at earthquake speeds.

Slow slip events repeat at intervals of a year to a few years. Compared to major earthquakes, which have repeat times of hundreds of years (or more), slow slip events are actually very frequent. Even in the short time of a couple of decades that we’ve observed these types of slip, many cycles have occurred in several places – notably around the Pacific Rim.

Earthquakes may also trigger slow slip. In particular, the magnitude 7.8 Kaikōura earthquake in New Zealand in 2016 triggered slow slip events up to 600km away from its epicentre.

It is not known why some fault segments host slow slip and others host earthquakes. Neither is it known whether the same area can change behaviour and host either slow slip or earthquakes at different times. It’s therefore important to characterise the source of slow slip, and find out what materials help create slow slip and under what conditions.

The Hikurangi subduction zone (where the Pacific ocean floor is pulled underneath the New Zealand continent) offshore New Zealand’s North Island is potentially the country’s largest earthquake fault and is a unique opportunity to investigate slow slip events. This is because slow slip here happens shallower and closer to the shoreline than anywhere else in the world.

These International Ocean Discovery Program expeditions – which drilled to just over 1km deep in water depths of 3.5km in late 2017 and early 2018 – revealed that the seafloor rocks and sediments hosting slow slip in Hikurangi are extremely variable. The range of rocks, described in a recent Science Advances paper led by Philip Barnes of NIWA (New Zealand’s National Institute of Water and Atmospheric Research), include mudstones, sands, carbonates, and sedimentary deposits from oceanic volcanic eruptions. The seafloor samples show that the source of the slow slip is a mixture of very soft sediment and hard, solid rocks.

The diverse seafloor sediments are not the only variability offshore of New Zealand. The seafloor itself is also very rough, including seamounts (submarine mountains rising over a kilometre above the seafloor). This seafloor roughness also makes the fault vary depending on where along it you are.

The observations are consistent with a hypothesis where slow slip events occur in rocks that are transitional between moving steadily and moving in earthquakes. One way to think of this model is as rigid rocks interacting with softer, more ductile surroundings. Researchers using numerical simulations and laboratory experiments have also suggested that variable fault rocks can cause slow slip.

But diverse fault rock isn’t the only model for the mechanics of slow slip. Another possibility is that pressurised fluids decrease frictional resistance and slip speed along faults. It is also possible that some rocks become stronger when they move faster – so that faults start accelerating but slow down before reaching earthquake speeds.

The recent discoveries in New Zealand may be applicable to other depths and locations around the world. However, future studies will undoubtedly lead to further insights and complexities – including in the relationship between slow slip events and earthquakes.