The Atlantic Ocean Is Getting Wider Every Year 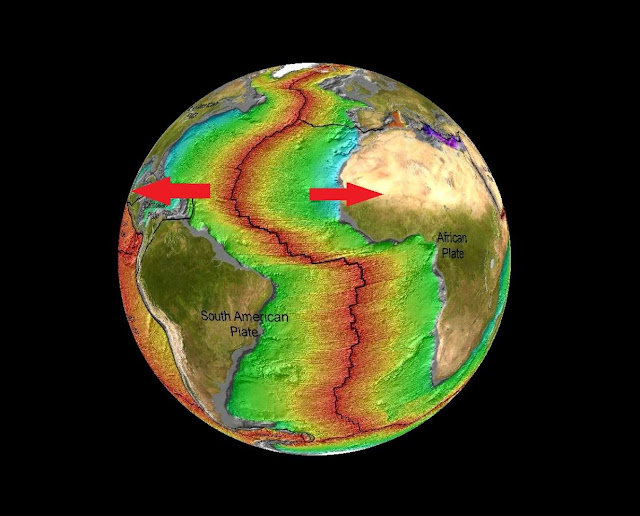 The Atlantic Ocean Is Getting Wider Every Year, Pushing the Americas Away From Europe and Africa

An upsurge of matter from deep beneath the Earth's crust could be pushing the continents of North and South America further apart from Europe and Africa, new research has found.

The plates attached to the Americas are moving apart from those attached to Europe and Africa by four centimetres per year. In between these continents lies the Mid-Atlantic Ridge, a site where new plates are formed and a dividing line between plates moving to the west and those moving to the east; beneath this ridge, material rises to replace the space left by the plates as they move apart.

Conventional wisdom is that this process is normally driven by distant gravity forces as denser parts of the plates sink back into the Earth. However, the driving force behind the separation of the Atlantic plates has remained a mystery because the Atlantic ocean is not surrounded by dense, sinking plates.

Now a team of seismologists, led by the University of Southampton, have found evidence of an upwelling in the mantle -- the material between the Earth's crust and its core -- from depths of more than 600 kilometres beneath the Mid Atlantic ridge, which could be pushing the plates from below, causing the continents to move further apart.

Upwellings beneath ridges are typically thought to originate from much shallower depths of around 60 km.

The findings, published in the journal Nature provide a greater understanding of plate tectonics which causes many natural disasters around the world, including earthquakes, tsunamis and volcanic eruptions.

Over two research cruises on the RV Langseth and RRV Discovery, the team deployed 39 seismometers at the bottom of the Atlantic as part of the PI-LAB (Passive Imaging of the Lithosphere-Asthenosphere Boundary) experiment and EURO-LAB (Experiment to Unearth the Rheological Oceanic Lithosphere-Asthenosphere Boundary). The data provides the first large scale and high-resolution imaging of the mantle beneath the Mid-Atlantic Ridge.

This is one of only a few experiments of this scale ever conducted in the oceans and allowed the team to image variations in the structure of the Earth's mantle near depths of 410 km and 660 km -- depths that are associated with abrupt changes in mineral phases. The observed signal was indicative of a deep, sluggish and unexpected upwelling from the deeper mantle.

Lead author, Matthew Agius, a former post-doctoral fellow at the University of Southampton and currently at Università degli studi Roma Tre said: "This was a memorable mission that took us a total of 10 weeks at sea in the middle of the Atlantic Ocean. The incredible results shed new light in our understanding of how the Earth interior is connected with plate tectonics, with observations not seen before."

Dr Harmon said: "There is a growing distance between North America and Europe, and it is not driven by political or philosophical differences -- it is caused by mantle convection!"

Dr Rychert said: "This was completely unexpected. It has broad implications for our understanding of Earth's evolution and habitability. It also demonstrates how crucial it is to gather new data from the oceans. There is so much more to explore!"

Professor Mike Kendall added: "This work is exciting and that it refutes long held assumptions that mid-ocean ridges might play a passive role in plate tectonics. It suggests that in places such as the Mid-Atlantic, forces at the ridge play an important role in driving newly-formed plates apart."

The above story is based on Materials provided by University of Southampton.