Earth's Magnetic Field Flipped 42,000 Years Ago. The Consequences Were Dramatic 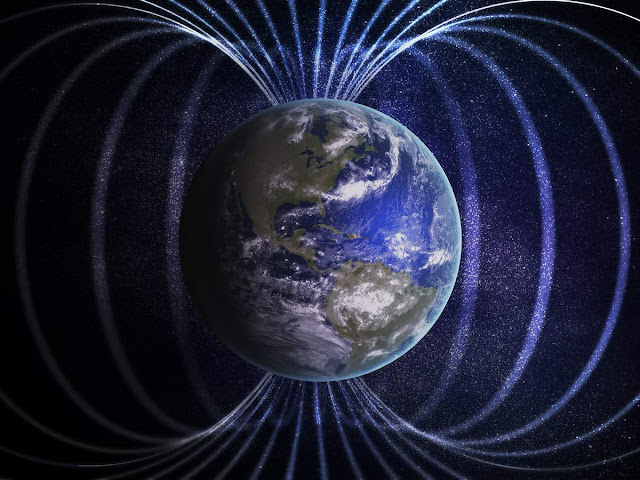 A global period of upheaval 42,000 years ago was the result of a reversal in Earth's magnetic field, new research has found.

According to radiocarbon preserved in ancient tree rings, several centuries' worth of climate breakdown, mass extinctions, and even changes in human behaviour can be directly linked to the last time Earth's magnetic field changed its polarity.

The research team has named the period the Adams Transitional Geomagnetic Event, or Adams Event, after sci-fi writer Douglas Adams, who famously declared the number 42 the ultimate answer to life, the Universe, and everything.

"For the first time ever, we have been able to precisely date the timing and environmental impacts of the last magnetic pole switch," said Earth scientist Chris Turney of the University of New South Wales in Australia.

"The findings were made possible with ancient New Zealand kauri trees, which have been preserved in sediments for over 40,000 years. Using the ancient trees we could measure, and date, the spike in atmospheric radiocarbon levels caused by the collapse of Earth's magnetic field."

This most recent period of magnetic reversal is known as the Laschamp event, and it is what we call a geomagnetic excursion. This is when the planet's magnetic poles briefly swap places before returning to their original positions. It's one of the most well studied of Earth's magnetic field events, recorded by ferromagnetic minerals.

It took place around 41,000 years ago, and lasted for around 800 years. Exactly what impact this event had on life on the planet was unclear, though - so when scientists uncovered an ancient kauri tree (Agathis australis) in 2019 that had been alive during this time period, they seized on the chance to learn more.

That's because trees record atmospheric activity in their annual growth rings. In particular, carbon-14, or radiocarbon, can reveal a lot of information about celestial activity.

Radiocarbon only occurs on Earth in trace amounts compared to the other naturally occurring carbon isotopes. It's formed in the upper atmosphere under the bombardment of cosmic rays from space. When these rays enter the atmosphere, they interact with the local nitrogen atoms to trigger a nuclear reaction that produces radiocarbon.

Since cosmic rays are constantly streaming through space, Earth receives a more or less steady supply of radiocarbon. Therefore, a spike in radiocarbon in tree rings tells us that Earth had greater exposure to radiocarbon during that year.

When Earth's magnetic field is weakened, as it was during the Laschamp event, more cosmic rays penetrate through to the atmosphere to produce more radiocarbon. Because of this, scientists had previously been able to ascertain that Earth's magnetic field had weakened to about 28 percent of its normal strength during that 800-year period.

The kauri tree, however, allowed the research team to study the years leading up to the Laschamp event. They found that the Adams event took place from about 42,200 years ago, and the magnetic field was at its weakest point before the Laschamp event.

"Earth's magnetic field dropped to only 0-6 percent strength during the Adams Event," Turney explained. "We essentially had no magnetic field at all - our cosmic radiation shield was totally gone."

During this time, the Sun's magnetic field would also have weakened several times, as it, too, experienced magnetic reversal as part of its regular cycle. These periods see less sunspot and flare activity, but the Sun's magnetic field also provides Earth with a measure of protection from cosmic rays - so, during these solar minima, cosmic ray bombardment would have increased again.

This weakened magnetic field would have triggered substantial changes in Earth's atmospheric ozone, with dramatic consequences, including electrical storms and spectacular aurorae, and climate change around the world.

"The ionised air 'fried' the ozone layer, triggering a ripple of climate change across the globe."

This is consistent with climate and environmental changes from this time observed in other records from across the globe, such as the mysterious extinction of Australia's megafauna.


The research has been published in Science.
Share to: