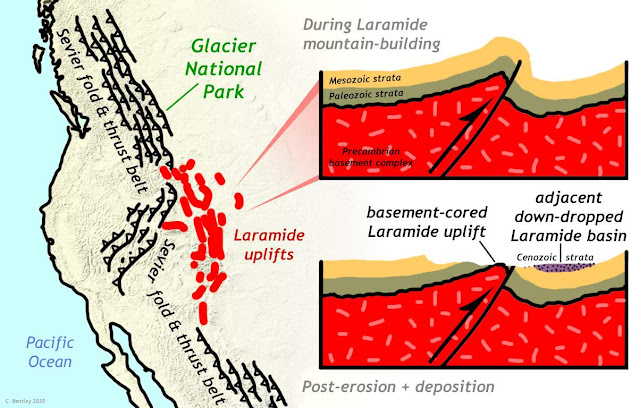 A group of University of Wyoming professors and students has identified an unusual belt of igneous rocks that stretches for over 2,000 miles from British Columbia, Canada, to Sonora, Mexico.

“Geoscientists usually associate long belts of igneous rocks with chains of volcanoes at subduction zones, like Mount Shasta, Mount Hood, Mount St. Helens and Mount Rainer,” says Jay Chapman, an assistant professor in UW’s Department of Geology and Geophysics. “What makes this finding so interesting and mysterious is that this belt of igneous rocks is located much farther inland, away from the edge of the continent, and doesn’t contain any evidence for producing volcanoes. In fact, all of the melting to generate the igneous rocks originally took place deep underground, five to 10 miles beneath the surface.”

Chapman is lead author of a paper, titled “The North American Cordilleran Anatectic Belt,” which was published online in February in the journal Earth-Science Reviews. The print version will be published this month.

The paper is a result of a special course taught by Simone Runyon, an assistant professor in UW’s Department of Geology and Geophysics, and Chapman. Runyon, six UW graduate students and one undergraduate student, who took part in the course, are co-authors of the paper.

“It was really fascinating to start with a scientific question in a classroom, then collect and analyze data, and eventually publish our results,” says Cody Pridmore, a UW graduate student from Orange, Calif., and co-author of the paper. “It’s a process most college students don’t get to experience.”

One clue to the origin of the belt of igneous rocks is that the rocks chiefly formed 80 million to 50 million years ago, during a mountain-building event called the Laramide orogeny.

“The Laramide orogeny created most of the major mountain ranges we have in Wyoming, and the name actually comes from the Laramie Range,” Chapman says. “Although there are no igneous rocks of this type and age present in those mountains, we suspect that the tectonic processes that created the mountains also contributed to melting Earth’s crust.”

The researchers have several working hypotheses about what caused the rocks to melt. One hypothesis is that water infiltrated the deep crust.

“The geochemistry of these rocks indicates that melting may have occurred at relatively low temperatures, below 800 degrees Celsius,” says Jessie Shields, a Ph.D. student at UW from Minneapolis, Minn., who is working to solve this mystery. “That is still very hot, but not hot enough to produce very large volumes of magma. Water lowers the melting point of rocks, similar to how salt lowers the melting point of ice, and could increase the amount of magma generated.”

This work has implications for what causes rocks to melt and where specific types of magmas can be found.

“Many of the igneous systems in the study area contain economically important ore deposits,” says Runyon, who specializes in ore deposits. “Understanding the large-scale igneous processes that form these provinces helps us to better understand how ore deposits form and to better explore for natural resources.”

The above story is based on materials provided by University of Wyoming.