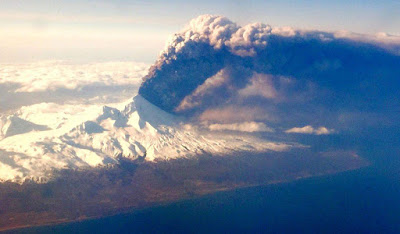 Avolcanic eruption from the Alaskan volcano of Great Sitkin has launched ash high into the air and further explosions are possible, according to the authorities.

The Alaska Volcano Observatory (AVO) has issued a red aviation alert for Great Sitkin, meaning "significant emission" of volcanic ash into the atmosphere is likely. The eruption does not appear to have sparked any evacuation warnings.

The observatory issued a notice for aircraft at around 6 a.m. UTC Wednesday morning in which it warned an "explosive eruption" occurred about an hour prior, sending up a cloud of volcanic ash. The eruption is thought to have lasted between one and two minutes.

Initial reports suggested the cloud from the eruption was 15,000ft high. Since that explosion the cloud has detached from the volcano and is moving eastward.

It is unclear at the time of writing how the eruption may affect or has affected flights over the region.

Volcanic ash is known to have damaging effects on aircraft because it can erode crucial components such as turbine blades in the engine and scratch landing lights and windscreens.

It can also block fuel nozzles and air filters, set off fire alarms in the cabin, interfere with radio communication systems, and block sensors that let the pilots know how fast the aircraft is going.

Great Sitkin is a volcano that occupies most of the northern half of Great Sitkin Island, which is part of the Aleutian Islands chain. The volcano is oval-shaped, eight by 11 kilometers at its base, and 5,709ft tall.

It is about 26 miles east of the community of Adak, and around 1,167 miles away from Anchorage, Alaska's most populous city, which is to the north east.

The last time Great Sitkin erupted was in 1974, marking at least the third time it had done so during the 20th century.