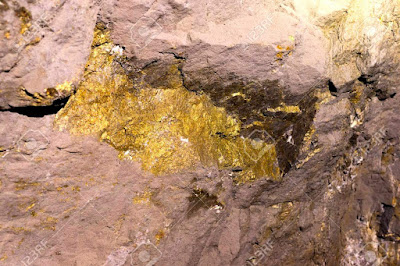 For decades scientists have been puzzled by the formation of rare hyper-enriched gold deposits in places like Ballarat in Australia, Serra Palada in Brazil, and Red Lake in Ontario. While such deposits typically form over tens to hundreds of thousands of years, these "ultrahigh-grade" deposits can form in years, month, or even days. So how do they form so quickly?

Studying examples of these deposits from the Brucejack Mine in northwestern British Columbia, McGill Professor Anthony Williams-Jones of the Department of Earth and Planetary Sciences and PhD student Duncan McLeish have discovered that these gold deposits form much like soured milk. When milk goes sour, the butterfat particles clump together to form a jelly.

What did you set to find out?

Scientists have long known that gold deposits form when hot water flows through rocks, dissolving minute amounts of gold and concentrating it in cracks in the Earth's crust at levels invisible to the naked eye. In rare cases, the cracks are transformed into veins of solid gold centimetres thick. But how do fluids with such low concentrations of gold produce rare ultrahigh-grade gold deposits?

What did you discover?

Our findings solve the paradox of "ultrahigh-grade" or "bonanza" gold formation, which has frustrated scientists for over a century. The paradox of bonanza gold deposits is that there is simply not enough time for them to form, they should not exist, but they do!

As the concentration of gold in hot water is very low, very large volumes of fluid need to flow through the cracks in the Earth's crust to deposit mineable concentrations of gold. This process would require millions of years to fill a single centimetre wide crack with gold, whereas these cracks typically seal in days, months, or years.

Using a powerful electron microscope to observe particles in thin slices of rock, we discovered that bonanza gold deposits form from a fluid much like milk. Milk consists of little butterfat particles that are suspended in water because they repel each other, like the negative ends of two magnets. When the milk goes sour the surface charge breaks down, and the particles clump together to form a jelly. It is the same with gold colloids, which consist of charged nanoparticles of gold which repel each other, but when the charge breaks down, they "flocculate" to form a jelly. This jelly gets trapped in the cracks of rocks to form the ultra high-grade gold veins. The gold colloids are distinctively red and can be made in the lab, whereas solutions of dissolved gold are colourless.

Why are the results important?

We produced the first evidence for gold colloid formation and flocculation in nature and the first images of small veins of gold colloid particles and their flocculated aggregates at the nano-scale. These images document the process by which the cracks are filled with gold and, scaled up through the integration of millions of these small veins, reveal how bonanza veins are formed.

How will this discovery impact the mining industry?

Our results are important to the mineral exploration and mining industry in Canada and around the world. Now that we finally understand how bonanza deposits form, mineral exploration companies will be able to use the results of our work to better explore for bonanza deposits as well as gold deposits. Genetic studies of Canada's most fertile metallogenic districts - such as the one we have just completed at Brucejack - are required to improve our understanding of how world-class mineral deposits form, and thereby develop more effective strategies for their exploration.

What's next for this research?

We suspect that the colloidal processes that operated at Brucejack and other bonanza gold systems may also have operated to form more typical gold deposits. The challenge will be to find suitable material to test this hypothesis. At Brucejack, the next step will be to better understand the reasons why colloid formation and flocculation occurred on the scale observed and reconstruct the geological environment of these processes. We have also been preparing gold colloids in the lab in an attempt to simulate what we discovered at Brucejack.

The above story is based on materials provided by Mcgill University.