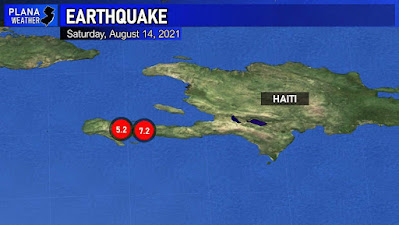 The US Geological Survey said it's likely that casualties are "high" after a 7.2-magnitude earthquake struck near Haiti Saturday morning.

"High casualties are probable and the disaster is likely widespread," according to the USGS.

A tsunami threat was issued for the region, the US Tsunami Warning System reported. Waves as high as 3 meters (about 10 feet) above the tide level are possible along some of the country's coast.

The earthquake was about 12 kilometers (7.5 miles) northeast of Saint-Louis-du-Sud and 13 kilometers deep, according to the US Geological Survey (USGS).

At least two cities reported major devastation: Les Cayes and Jeremie. Phone lines were down in Petit Trou de Nippes, the epicenter of the quake, and no news emerged immediately from that city, leaving Haitian officials to fear for the worst.

“Many houses fell, many people are trapped under the rubble,” said Widchell Augustin, 35, said from Les Cayes, where he lives. “We can hear people screaming under the rubble. People are running back-and-forth to the hospital.”

Haiti’s southern peninsula, the site of the quake, was hit hard by Hurricane Matthew in 2016 and, five years later, has still not fully recovered. Remnants of the devastationstill linger, with Haiti’s broke government unable to fully restore all the houses, roads and government buildings destroyed.

The devastating magnitude 7.0 quake in 2010 killed more than 220,000 people and leveled much of the capital, Port-au-Prince.

The U.S. Tsunami Warning Center reported  a tsunami threat because of Saturday’s earthquake, saying that “tsunami waves are forecast for some coasts.”