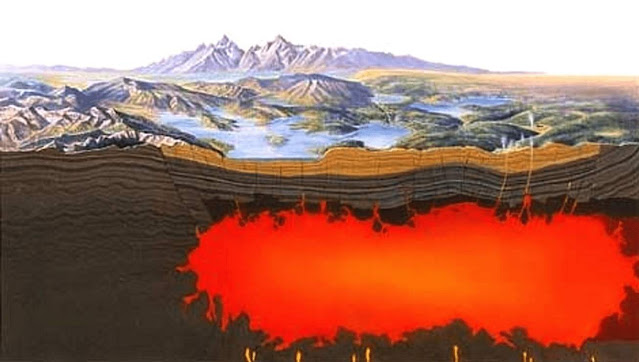 The Yellowstone supervolcano in northwest Wyoming isn't just one of the most fascinating places on Earth, it's potentially one of the most volatile, thanks to the reservoir of magma contained within.

A new study by an international team of researchers has determined that there's actually more magma under Yellowstone than was previously thought, adding important details to models that could be used to fine tune our estimates on the next big eruption.

In their paper published in the journal Science, the group describes analyzing years of seismic data from the site and building supercomputing models. Kari Cooper with the University of California Davis has published a Perspective piece on the work done by the team on this new effort and also outlines the tools that geologists use to predict when a volcano might erupt.

The Yellowstone Caldera is located in Wyoming's Yellowstone National Park, and prior research has shown its last major eruption was approximately 640,000 years ago. Prior research has also shown that there are two large magma reservoirs below the caldera—one just below the surface, the other a few kilometers down.

The ratio of melted rock to crystals in the top reservoir is a reliable indicator of how close a volcano is to erupting. Previous estimates showed the ratio of rock to crystal in the top reservoir was approximately 9%, suggesting the volcano was nowhere near an eruption point. In this new effort, however, the researchers have taken a closer look at the ratio and have found it is much higher than earlier estimates showed.

To learn more about the ratio in the reservoir, the researchers analyzed 20 years of seismic data for the area with a supercomputer, which created a model that simulated the reservoir, showing both the size of the reservoir and its ratios of rock to crystal.

They found that the ratio of rock to crystal was much higher than previous estimates—they found it to be 16% to 20%. They also found that the reservoir was approximately twice as large as previously thought, at approximately 1,600 cubic kilometers. They note that their findings do not indicate that an eruption is imminent; the ratio is still well below the threshold believed to be necessary to set off an explosion.

The above story is based on Materials provided by University of Illinois Urbana-Champaign.