What caused the Chilean earthquake ? 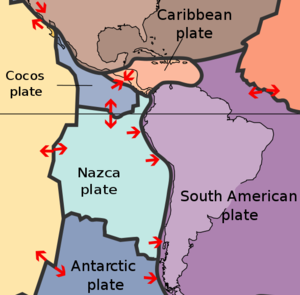 The ongoing subduction, along the Peru-Chile Trench, of the Nazca Plate under the South American Plate is largely responsible for the Andean orogeny. The Nazca Plate is bounded on the west by the Pacific Plate and to the south by the Antarctic Plate through the East Pacific Rise and the Chile Rise respectively. The movement of the Nazca Plate over several hotspots has created some volcanic islands as well as east-west running seamount chains that subduct under South America.
Share to: