What is Hydraulic Fracturing?


Hydraulic fracturing is a procedure that can increase the flow of oil or gas from a well. It is done by pumping liquids down a well into subsurface rock units under pressures that are high enough to fracture the rock. The goal is to create a network of interconnected fractures that will serve as pore spaces for the movement of oil and natural gas to the well bore. 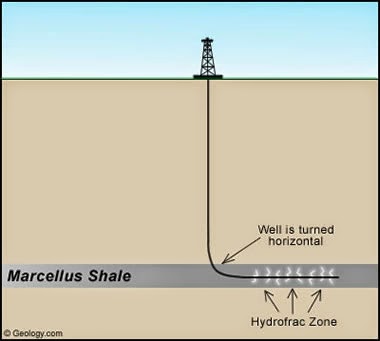 Successful Use of Hydraulic Fracturing in Shale

Hydraulic Fracturing in Other Shale Plays


As others learned of Mitchell Energy's success in the Barnett Shale of Texas the methods of horizontal drilling and hydraulic fracturing were tried in other organic-rich shales. These methods quickly succeeded in the Haynesville Shale and Fayetteville Shale of Louisiana, Texas and Arkansas - then in the Marcellus Shale in the Appalachian Basin. The methods worked in many other shales and are now being used to develop organic-rich shales in many parts of the world.
Hydraulic fracturing has also enabled production of natural gas liquids and oil from many wells. Rock units such as the Bakken Shale of North Dakota and the Niobrara Shale of Colorado, Kansas, Nebraska and Wyoming are now yielding significant amounts of oil from hydraulic fracturing.

Water is the driving fluid used in the hydraulic fracturing process. Depending upon the characteristics of the well and the rock being fractured a few million gallons of water can be required to complete a hydraulic fracturing job.
When the water is pumped into the well the entire length of the well is not pressurized. Instead, plugs are inserted to isolate the portion of well where the fractures are desired. Only this section of the well receives the full force of pumping. As pressure builds up in this portion of the well, water opens fractures, and the driving pressure extends the fractures deep into the rock unit. When pumping stops these fractures quickly snap closed and the water used to open them is pushed back into the borehole, back up the well and is collected at the surface. The water returned to the surface is a mixture of the water injected and pore water that has been trapped in the rock unit for millions of years. The pore water is usually a brine with significant amounts of dissolved solids.
Chemicals are often added to the water used in hydraulic fracturing. These additives serve a variety of purposes. Some thicken the water into a gel that is more effective at opening fractures and carrying proppants deep into the rock unit. Other chemicals are added to: reduce friction, keep rock debris suspended in the liquid, prevent corrosion of equipment, kill bacteria, control pH and other functions.
Most companies have been resistant to revealing the composition of their hydraulic fracturing fluids. They believe that this information should be kept private to protect their competitive research. However, regulators are starting to demand the information and some companies are starting to share the information voluntarily.