Hydraulic fracturing triggered a series of small earthquakes in 2013 on a previously unmapped fault in Harrison County, Ohio. 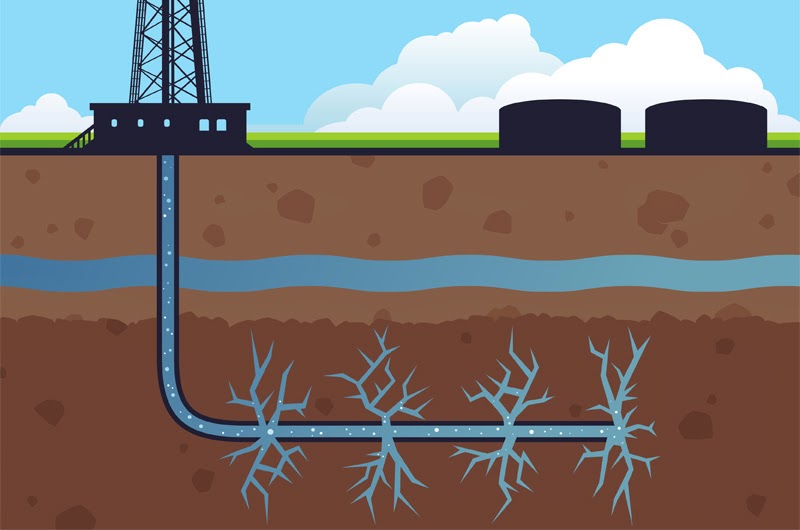 Nearly 400 small earthquakes occurred between Oct. 1 and Dec. 13, 2013, including 10 "positive" magnitude earthquake, none of which were reported felt by the public. The 10 positive magnitude earthquakes, which ranged from magnitude 1.7 to 2.2, occurred between Oct. 2 and 19, coinciding with hydraulic fracturing operations at nearby wells.
This series of earthquakes is the first known instance of seismicity in the area.
Hydraulic fracturing, or fracking, is a method for extracting gas and oil from shale rock by injecting a high-pressure water mixture directed at the rock to release the gas inside. The process of hydraulic fracturing involves injecting water, sand and chemicals into the rock under high pressure to create cracks. The process of cracking rocks results in micro-earthquakes. Hydraulic fracturing usually creates only small earthquakes, ones that have magnitude in the range of negative 3 (−3) to negative 1 (-1).
"Hydraulic fracturing has the potential to trigger earthquakes, and in this case, small ones that could not be felt, however the earthquakes were three orders of magnitude larger than normally expected," said Paul Friberg, a seismologist with Instrumental Software Technologies, Inc. (ISTI) and a co-author of the study.
The earthquakes revealed an east-west trending fault that lies in the basement formation at approximately two miles deep and directly below the three horizontal gas wells. The EarthScope Transportable Array Network Facility identified the first earthquakes on Oct. 2, 2013, locating them south of Clendening Lake near the town of Uhrichsville, Ohio. A subsequent analysis identified 190 earthquakes during a 39-hour period on Oct. 1 and 2, just hours after hydraulic fracturing began on one of the wells.
The micro-seismicity varied, corresponding with the fracturing activity at the wells. The timing of the earthquakes, along with their tight linear clustering and similar waveform signals, suggest a unique source for the cause of the earthquakes -- the hydraulic fracturing operation. The fracturing likely triggered slip on a pre-existing fault, though one that is located below the formation expected to confine the fracturing, according to the authors.
"As hydraulic fracturing operations explore new regions, more seismic monitoring will be needed since many faults remain unmapped." Friberg co-authored the paper with Ilya Dricker, also with ISTI, and Glenda Besana-Ostman originally with Ohio Department of Natural Resources, and now with the Bureau of Reclamation at the U.S. Department of Interior.

Note: This story has been adapted from a news release issued by the Seismological Society of America
Share to: