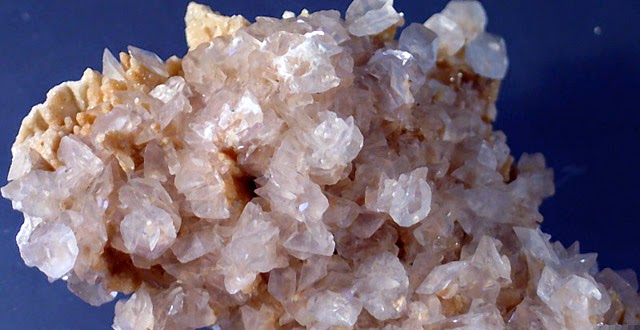 Dolomite is a carbonate mineral composed of calcium magnesium carbonate CaMg(CO3)2.  It was first described in 1791 as a rock by the French naturalist and geologist Déodat Gratet de Dolomieu.

But who would have thought that the formation of this mineral is still not fully understood, although geologists are aware of large deposits of directly formed (primary) dolomite from the past 600 million years.

The process of recent primary dolomite formation is restricted to extreme ecosystems such as bacterial mats in highly saline lakes and lagoons.

“As these systems are very limited in space, there is an explanation gap for geologists for the widespread presence of fossil dolomite,” explained Dr Stefan Krause, Geomicrobiologist at GEOMAR-Helmholtz Centre for Ocean Research Kiel.

The team has now brought a little light into the darkness of this scientific riddle. Their findings were published in the journal Geology.

In simple laboratory experiments with globally distributed marine bacteria which use sulphur compounds instead of oxygen for energy production (sulfaterespiration), the scientists were able to demonstrate the formation of primary dolomite crystals under conditions that prevail today in marine sediments.

“The dolomite precipitates exclusively within a mucus matrix, secreted by the bacteria to form biofilms,” said Dr Krause. “Different chemical conditions prevail within the biofilm compared to in the surrounding water. In particular, the alteration of the magnesium to calcium ratio plays an important role. These changes allow for the formation of dolomite crystals.”

“We were able to show that the ratio of different isotopes of calcium between the ambient water, the biofilm and dolomite crystals is different,” explained Dr Volker Liebetrau of GEOMAR. “This ratio is an important tool for us to reconstruct past environmental conditions. The fact that bacteria are involved in this process allows more precise interpretations of climate signals that are stored in rocks.”

Evidence of primary dolomite formation by a process as common as microbial sulphate respiration under conditions that currently prevail in the seabed, provides new insights into the reconstruction of fossil dolomite deposits. But why are large-scale deposits from primary dolomite no longer formed at the ocean floor?

“Here we are still faced with a puzzle,” explained Prof Tina Treude, head of the Working Group at GEOMAR. “One possibility is that massive primary dolomite can form particularly during times when large quantities of organic matter in the seabed are degraded by sulfate-respiring bacteria. Such conditions exist when the sea water above the seafloor is free of oxygen. In Earth’s history, several such oxygen-free periods have occurred, partly consistent with time periods of intensified dolomite deposition.”