Metamorphism is the change that takes place within a body of rock as a result of it being subjected to conditions that are different from those in which it formed. In most cases, but not all, this involves the rock being deeply buried beneath other rocks, where it is subjected to higher temperatures and pressures than those under which it formed. Metamorphic rocks typically have different mineral assemblages and different textures from their parent rocks  but they may have the same overall composition.

The change occurs primarily due to heat, pressure, and the introduction of chemically active fluids. The chemical components and crystal structures of the minerals making up the rock may change even though the rock remains a solid.  {Read about The Factors That Control Metamorphic Processes}.

Changes at or just beneath Earth's surface due to weathering or diagenesis are not classified as metamorphism. Metamorphism typically occurs between diagenesis (max. 200°C), and melting (~850°C).

Most metamorphism results from the burial of igneous, sedimentary, or pre-existing metamorphic to the point where they experience different pressures and temperatures than those at which they formed. 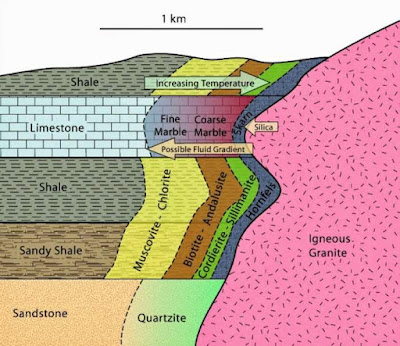 Regional metamorphism includes any metamorphic process that occurs over a large region. It is therefore the most widespread and common  type of metamorphism.

A rock is squeezed under directed pressure during metamorphism it is likely to be deformed, and this can result in a textural change such that the minerals are elongated in the direction perpendicular to the main stress. This contributes to the formation of foliation.

When a rock is both heated and squeezed during metamorphism, and the temperature change is enough for new minerals to form from existing ones, there is a likelihood that the new minerals will be forced to grow with their long axes perpendicular to the direction of squeezing.

Squeezing and heating alone and squeezing, heating, and formation of new minerals can contribute to foliation, but most foliation develops when new minerals are forced to grow perpendicular to the direction of greatest stress. This effect is especially strong if the new minerals are platy like mica or elongated like amphibole.

An example would be the Himalayan Range.


Metamorphic rocks that form under either low-pressure conditions or just confining pressure do not become foliated. In most cases, this is because they are not buried deeply, and the heat for the metamorphism comes from a body of magma that has moved into the upper part of the crust. This is contact metamorphism.

Any type of magma body can lead to contact metamorphism, from a thin dyke to a large stock. The type and intensity of the metamorphism, and width of the metamorphic aureole will depend on a number of factors, including the type of country rock, the temperature of the intruding body and the size of the body.

Contact metamorphic aureoles are typically quite small, from just a few centimetres around small dykes and sills, to as much as 100 m around a large stock.

Contact metamorphism can take place over a wide range of temperatures — from around 300° to over 800°C — and of course the type of metamorphism, and new minerals formed, will vary accordingly. The nature of the country rock is also important. Mudrock or volcanic rock will be converted to hornfels. Limestone will be metamorphosed to marble, and sandstone to quartzite.
Read more about Contact Metamorphism here.

Note: Even if formed during regional metamorphism, quartzite and marble do not necessarily exhibit foliation because their minerals (quartz and calcite respectively) do not tend to show alignment.