How to Use QAPF Diagram to Classify Igneous Rocks?

Igneous rocks are classified on the basis of mineralogy, chemistry, and texture. Texture is used to subdivide igneous rocks into two major groups: (1) the plutonic rocks, with mineral grain sizes that are visible to the naked eye, and (2) the volcanic rocks, which are usually too fine-grained or glassy for their mineral composition to be observed without the use of a petrographic microscope. As noted in the sidebar to the left, this is largely a genetic classification based on the depth of origin of the rock (volcanic at or near the surface, and plutonic at depth). Remember that porphyritic rocks have spent time in both worlds. Let's first examine the classification of plutonic rocks.

A QAPF diagram is a double triangle diagram which is used to classify igneous rocks based on mineralogic composition. The acronym, QAPF, stands for "Quartz, Alkali feldspar, Plagioclase, Feldspathoid (Foid)". These are the mineral groups used for classification in QAPF diagram. Q, A, P and F percentages are normalized (recalculated so that their sum is 100%). 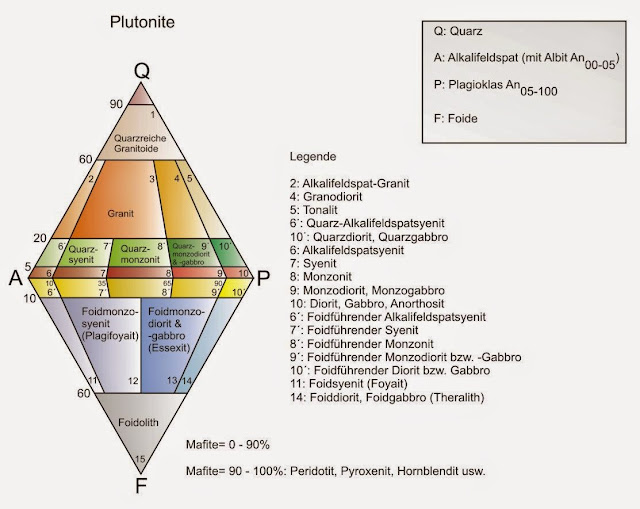 TAS is also used if volcanic rock contains volcanic glass (such as obsidian). QAPF diagrams are also not used if mafic minerals make up more than 90% of the rock composition (for example:peridotites and pyroxenites).
An exact name can be given only if the mineralogical composition is known, which cannot be determined in the field. 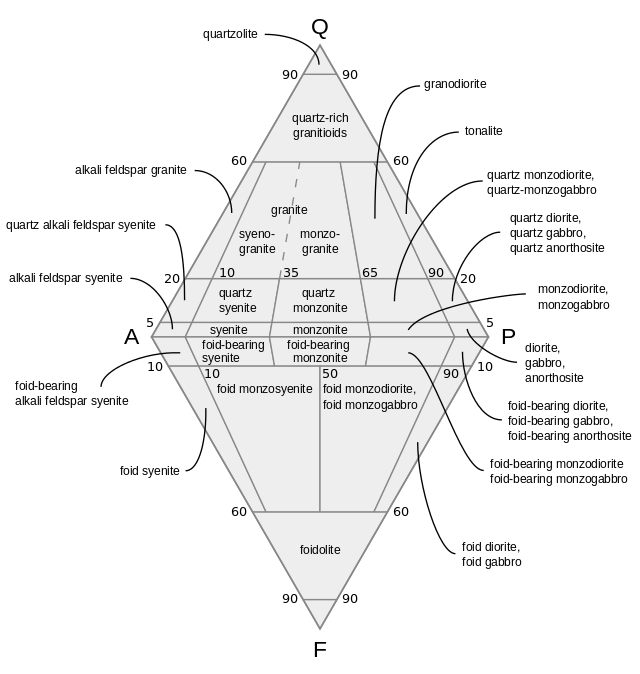 The plotting of rock modes on these triangular diagrams is simpler than it may appear. The three components, Q (quartz) + A (alkali (Na-K) feldspar) + P (plagioclase), are recalculated from the mode to sum to 100 percent. Each component is represented by the corners of the equilateral triangle, the length of whose sides are divided into 100 equal parts.

Any composition plotting at a corner, therefore, has a mode of 100 percent of the corresponding component. Any point on the sides of the triangle represents a mode composed of the two adjacent corner components. For example, a rock with 60 percent Q and 40 percent A will plot on the QA side at a location 60 percent of the distance from A to Q.

A rock containing all three components will plot within the triangle. Since the sides of the triangle are divided into 100 parts, a rock having a mode of 20 percent Q and 80 percent A + P (in unknown proportions for the moment) will plot on the line that parallels the AP side and lies 20 percent of the distance toward Q from the side AP.

See Also:
Excellent application to classify igneous rocks.
The Texture of Igneous rocks
What is the difference between phaneritic and Aphanitic Rocks ?
General Classification of Igneous Rocks
Top 7 Differentials between Sedimentary rocks and Igneous rocks
Download Excel sheet help you to plot the rates on the diagram.
Share to: