Geoengineering proposal may backfire: Ocean pipes 'not cool,' would end up warming climate 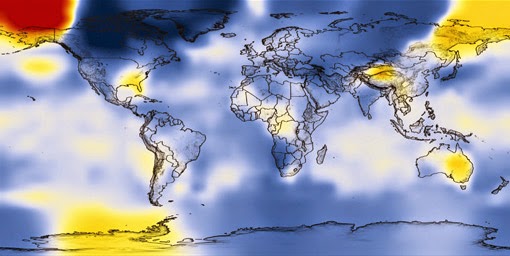 To combat global climate change caused by greenhouse gases, alternative energy sources and other types of environmental recourse actions are needed. There are a variety of proposals that involve using vertical ocean pipes to move seawater to the surface from the depths in order to reap different potential climate benefits.A new study from a group of Carnegie scientists determines that these types of pipes could actually increase global warming quite drastically. It is published in Environmental Research Letters.

One proposed strategy--called Ocean Thermal Energy Conversion, or OTEC--involves using the temperature difference between deeper and shallower water to power a heat engine and produce clean electricity. A second proposal is to move carbon from the upper ocean down into the deep, where it wouldn't interact with the atmosphere. Another idea, and the focus of this particular study, proposes that ocean pipes could facilitate direct physical cooling of the surface ocean by replacing warm surface ocean waters with colder, deeper waters.
"Our prediction going into the study was that vertical ocean pipes would effectively cool the Earth and remain effective for many centuries," said Ken Caldeira, one of the three co-authors.
The team, which also included lead author Lester Kwiatkowski as well as Katharine Ricke, configured a model to test this idea and what they found surprised them. The model mimicked the ocean-water movement of ocean pipes if they were applied globally reaching to a depth of about a kilometer (just over half a mile). The model simulated the motion created by an idealized version of ocean pipes, not specific pipes. As such the model does not include real spacing of pipes, nor does it calculate how much energy they would require.
Their simulations showed that while global temperatures could be cooled by ocean pipe systems in the short term, warming would actually start to increase just 50 years after the pipes go into use. Their model showed that vertical movement of ocean water resulted in a decrease of clouds over the ocean and a loss of sea-ice.
Colder air is denser than warm air. Because of this, the air over the ocean surface that has been cooled by water from the depths has a higher atmospheric pressure than the air over land. The cool air over the ocean sinks downward reducing cloud formation over the ocean. Since more of the planet is covered with water than land, this would result in less cloud cover overall, which means that more of the Sun's rays are absorbed by Earth, rather than being reflected back into space by clouds.
Water mixing caused by ocean pipes would also bring sea ice into contact with warmer waters, resulting in melting. What's more, this would further decrease the reflection of the Sun's radiation, which bounces off ice as well as clouds.
After 60 years, the pipes would cause an increase in global temperature of up to 1.2 degrees Celsius (2.2degrees Fahrenheit). Over several centuries, the pipes put the Earth on a warming trend towards a temperature increase of 8.5 degrees Celsius (15.3 degrees Fahrenheit).
"I cannot envisage any scenario in which a large scale global implementation of ocean pipes would be advisable," Kwiatkowski said. "In fact, our study shows it could exacerbate long-term warming and is therefore highly inadvisable at global scales."
The authors do say, however, that ocean pipes might be useful on a small scale to help aerate ocean dead zones.