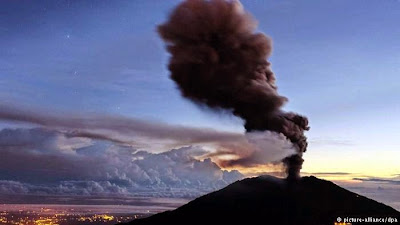 Turrialba volcano spewed a column of smoke and ash on Monday that reached Costa Rica's capital San Jose 60 kilometers (40 miles) away, authorities said.
The latest moderate eruption, which included rocks around the crater area, hit at near 2100 GMT, raising eyebrows but not great alarm in the capital, the Volcanic and Seismic Center reported. Its previous rumble came just Thursday.
The latest eruption lasted about a half hour and was accompanied by a coating of ash in San Jose, and a strong smell of sulfur.
The volcano, 3,340 meters (10,960 feet) high, erupted in early March and shut down the airport for nearly two days.
Turrialba was inactive for 130 years until it came back to life in the 1990s. In late October last year it erupted with great force, spewing ash and magma. It has been rumbling ever since.