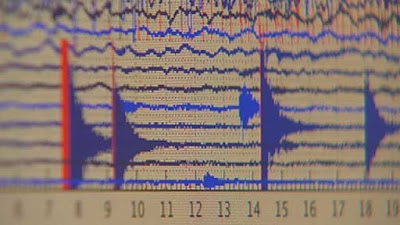 A natural gas extraction company controlled by energy giant Exxon Mobil sought to prove Wednesday that it is not to blame for a recent rash of small earthquakes in North Texas, telling a powerful state agency that it believes the earthquakes occurred naturally.

XTO Energy submitted evidence to the Texas Railroad Commission, which regulates the state's massive oil and gas industry, during a hearing that will test the agency's willingness to suspend permits for injection wells based on seismology. The wells store wastewater from hydraulic fracturing, which has opened vast reserves of natural gas in North Texas but critics blame for causing small earthquakes.

The multiday hearing is the first time the commission is requiring a company to prove it's not to blame for earthquakes. The commission, under recent policy changes, can now require companies to conduct seismic tests before applying for permits or revoke permits if wells are linked to earthquakes.

The hearings come just weeks after Gov. Greg Abbott signed a law that prohibits cities and other municipalities from banning hydraulic fracturing, a drilling method also known as fracking. The law came partly in response to the North Texas city of Denton voting to ban the drilling.

Studies have suggested a link between small earthquakes and injection wells in parts of Texas, Oklahoma and other states, but the industry has steadfastly denied any connection.

In Texas, a recent Southern Methodist University study looked at wells west of Fort Worth where thousands of gallons of wastewater from fracking are disposed each day. The study suggested the wells caused hundreds of earthquakes in 2013 and 2014 in the city of Azle and other nearby communities, where no seismic activity had previously been recorded.

Andree Griffin, XTO's vice president of geology and geophysics, challenged that study Wednesday and told the commission that the quakes were naturally occurring. Griffin testified that the Fort Worth Basin, where the gas-rich Barnett Shale is located, "has had several episodes of movement and reactivation of faults" over roughly 600 million years.

She said the earthquakes were far deeper than where the wastewater is injected, challenging the SMU study's conclusion that the quakes were triggered by rumblings in the shallow formation that migrated down the fault into the deepest layer of rock.

Separate hearings next week are set for another operator, EnerVest.

The commission won't take any immediate action. Legal and technical examiners are hearing each case and will develop a proposal for decision, which typically takes several months to finalize.

The hearings came about after a group of residents from Azle and nearby communities traveled to Austin in January 2014 to demand that the Texas Railroad Commission suspend operations of disposal wells. The commission hired its first seismologist and expanded its range of powers to include the ability to shut down wells linked to earthquakes.

The state's seismologist, Craig Pearson, said during a Railroad Commission meeting last week that he sees "no substantial proof" that the North Texas earthquakes are linked to oil and gas activity. And Gov. Greg Abbott says he is waiting on research from state officials before making pronouncements about the impact of oil and gas wells.

Reno Mayor Lynda Stokes, who led the group of North Texas residents to Austin last year, is skeptical the commission will suspend either of the companies' injection well operations, and worries the new law will nullify the city's ban on injection wells.