Mammoths might have survived except for bad 'mineral diet' 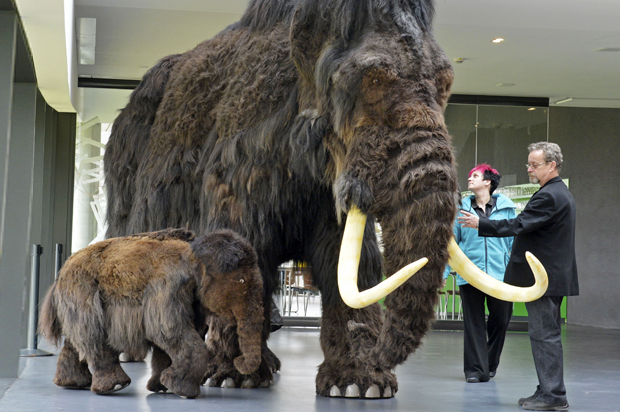 At the end of the Pleistocene mammoths of Northern Eurasia used to experience chronic mineral hunger. As a result they became extinct due to geochemical stress arising on a background of deep abiotic changes in ecosystems. Most likely they were receiving not enough of essential chemical elements.

Researchers around the world try to find out causes of extinction of the most prominent representatives of late Pleistocene megafauna -- the mammoths. There are two main versions: 1) changes in microclimate and anthropogenic pressure, and possibly simultaneous effect of both factors. There are other much less popular theories of their extinction: 1) infectious diseases or 2) fall of celestial bodies. However, hardly anybody has paid attention to geochemical changes of environment where Mammuthus primigenius lived.

Investigating remains of late mammoths, we frequently find obvious signs of skeletal diseases such as: osteoporosis, osteofibrosis, osteomalacia (softening and bending of bones), arthrosis, and other joint diseases -- says Sergei Leshchinsky. He also underlines that articular surface of extremity bones of some individuals are not only harmed but damaged and mutilated by these diseases. As for osteoporosis, in separate collections we found it in 90% of cases.

These diseases resulted in high traumatism of the animals; they got sprains and fractures even at very low loads. Mammoths with broken limbs or spine could not take food in sufficient quantities and could not follow herd. Such individuals died soon hunted by predators. As a result -- the nature was stronger than the giant animals, and mammoths became instinct.

From 2003 to 2013 Sergey Leshchinskiy analyzed over 23,500 bones and teeth of mammoths of Northern Eurasia to identify the symptoms of enzootic diseases. The destructive changes were revealed with the help of a magnifying glass (×10), in polished sections and histological sections under a stereomicroscope (magnification upto200×) and a scanning electron microscope (magnification upto10,000×), as well as by roentgenoscopy and densitometry.

We investigated mammoth bones and teeth, discovered in beast solonetzs lacustrine-alluvial localities of Russia, Poland and the Czech Republic.

The beast solonetz is the Russian term for a ground surface area characterized by a high content of certain macro- and microelements; as such it has a broader interpretation than "salt lick," "mineral lick" and "mineral source." Within the confines of the beast solonetz, animals eat soil and rocks and drink mineralized water from springs to maintain homeostasis, which is equivalent to the definition of "lithophagy."

Most of chemical elements are vital necessary for animals to retain health condition of skeleton, muscles, skin, hear, and others. Part of animals is doomed if they fail to satisfy a mineral starvation in time.

Lithophagy or geophagy practiced by primates is a commmon phenomenon in modern animal life; there is no doubt, therefore, that the mammoth was the largest of all lithophages in the Late Pleistocene of Northern Eurasia. This assertion is also confirmed by the frequent availability of mineral sub¬stances in the gastro-intestinal tract of mammoth carcasses and their coprolites, sometimes reaching 90% of their mass.

TSU researchers found mass destructive changes in mammoth bones and teeth up to 70% or more of total number of remains in different collection. In most cases different destructions accompany one another which may indirectly show the same reasons of such consequences. In collection of some excavation areas (Krasnoyarskaya Kurya, Kraków Spadzista Street) probably the most common disease is osteoporosis. We can see rarefaction in all age groups including infant mammoths what means that disease development began in prenatal period since females suffered from mineral starvation. Above all since bone resorption in osteoporosis may be mild marked outwardly; it means that real proportion of remains with signs of osteodystrophy is likely to be higher than can be detected at a superficial examination.

Why did mammoths and other large herbivores with large skeleton experience strong geochemical stress of Pleistocene?

At that time there was a considerable expansion of acidic and acidic-gley geochemical landscapes, resulting in a drastic deficiency of Ca, Mg, Na, P, I, Co, Cu, Se, Zn and other vital chemical elements. The change in habitat is closely associated with the drastic replacement of favourable Ca-Mg-Na landscapes with acidic and acidic-gley ones. The latter reached its maximum range by the end of the Pleistocene, and are still the predominant landscape in most of Northern Eurasia today. This transition can be explained by the general neotectonic lift, which was subsequently followed (17-10 ka BP) by changes in the macroclimate, which became more humid and warmer. As a result, coastal lowlands were flooded and central areas were swamped (degrading permafrost being one of the reasons). The soils of the high plains and foothills were heavily leached due to a lowering of the ground water levels and increased precipitations. In this situation only rare beast solonetz could have served as geochemical oases where the large herbivores could satisfy their mineral hunger. However, by the early Holocene there may have been an insufficient number of these oases to support the viability of isolated mammoth populations. A similar abiotic scenario may be drawn for North America, where mammoths went extinct at the same time.

Mammoth body size decrease and massive destructive changes in their bones and teeth indicate negative impact of the abiotic environment. Osteoporosis, osteomalacia, diseases of the joints indicate a metabolic disorder of alimentary nature.

The analysis of the clinical picture of the diseases deserves special attention -how rapidly did the disturbances in homeostasis and the formation of osteodystrophy occur in unfavourable geochemical conditions? Based on this study, it appears that the destructive changes developed rapidly: extensive bone pathologies such as those found in the Taymyrskiy mammoth or in the Shestakovo-Kochegur, Berelyokh, Lugovskoe and Krakow Spadzista Street mammoth populations are incompatible with along developmental period. Under conditions of smaller and fewer geochemical oases and predominantly snow or acidic swampy-ground waters as drinking water in the winter, the "later" mammoths may have suffered from chronic mineral deficiency for 6- 10 months a year.

"It is highly probable that this severe natural condition lasted for more than 15 thousand years and may have proven fatal for the largest representative of the terrestrial fauna at high latitudes," Sergey Leshchinskiy said. "The wool lyrhinoceros and cave bear may have suffered the same fate. Other large herbivores (bisons, horses and deer) have overcome the Holocene border, perhaps due to their greater mobility, although with a significant reduction of habitat and population size. Large cats and hyenas went extinct probably because of drastic reduction of nutritional resources at the time of the disintegration of the single "mammoth" ecosystem."

The very high percentage of skeleton pathologies suggests a high murrain among mammoths, irrespective of anthropogenic impact, which could not lead to this species extermination throughout its huge territory. Man was a witness and one of the participants in the natural process of the Pleistocene megafauna's extinction.