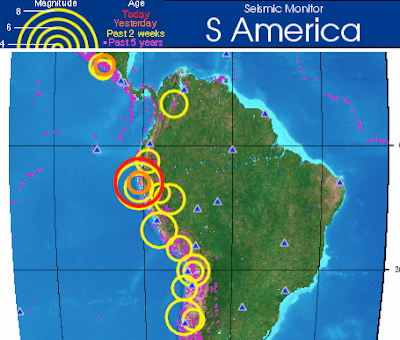 A team of volcanologists will leave on a trip of a lifetime next month when they undertake a four-month expedition exploring over 15 volcanoes along the South American Andes.


Dr Ian Schipper, an expert in igneous processes from Victoria University of Wellington, is part of the international six-person team taking part in the 4,000km 'Trail by Fire' research trip.

From November to February the team will research gas emissions from volcanoes located above the Nazca Plate subduction zone, from Peru to the southern tip of Chile.

Dr Schipper says it's the first time anyone has attempted a study of this kind on such a large scale.

"Gas measurements have been done by many observers and scientists, but what's new about this study is we're looking at the entire system in one go," he says.

The gases that form the atmosphere are continually recycled back deep into the earth at the subduction zones, where one tectonic plate sinks under another. During this process, the sinking plate releases gases that fuel volcanic eruptions.

"This study will give us a better understanding of how volatile recycling works on a continental scale, and it'll also give us information about the particular volatile behaviour at each individual volcano," he says.

The South American Andes is one of the world's most volcanically-active regions and yet little is known about some of the volcanoes, largely because of their inaccessibility.

The team's biggest safety concern is navigating the high mountainous roads to reach the remote locations of altitudes up to 5000m. Elevation is another big concern, especially as some of the equipment has never been used at that altitude before.

The team received a bursary from Land Rover, in partnership with the Royal Geographical Society (with Institute of British Geographers), which has supplied funding and the use of a Defender vehicle, specially modified by Land Rover Special Vehicle Operations to operate as a mobile laboratory and withstand the climate, terrain and altitude.

The team will also be using state-of-the-art technology to attain measurements of volcanic degassing, including unmanned aerial vehicles to take readings from inaccessible locations.

Dr Schipper says it's rare to have the opportunity to take part in research of such a large scale.

"Volcanoes are a difficult area to study because of the cost of specialist technology and getting to remote locations. Our largest instrument—the Thermo Fisher Delta Ray Spectrometer—requires continuous power and reference gas supplies. I can't imagine how we'd do a survey of this magnitude, in such remote places, without the bursary."