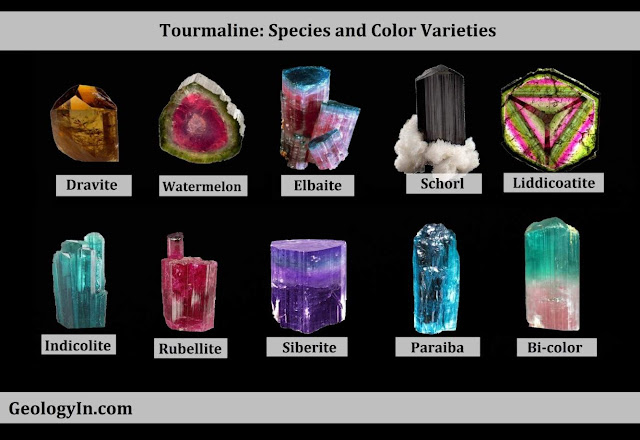 Tourmaline is a crystalline boron silicate mineral compounded with elements such as aluminium, iron, magnesium, sodium, lithium, or potassium. It is hard and durable and very well suited for jewelry.

Tourmaline is classified as a semi-precious stone and the gemstone comes in a wide variety of colors. It is a pyroelectric mineral, meaning that when warmed, it attracts dust and other lightweight particles.

Though Elbaite occurs in all color forms, the term Elbaite in the gemstone trade is sometimes used to describe the green form of Tourmaline. The other color forms of Elbaite have their own variety names on the gem market. Traditional Tourmaline gemstone variety names include Rubellite, the red or pink variety, Indicolite, the blue variety, and Watermelon Tourmaline, a multicolored Tourmaline of green and red.


Tourmaline has a variety of colors.

Tourmaline’s colors have many different causes. Usually, iron-rich tourmalines are black to bluish-black to deep brown, while magnesium-rich varieties are brown to yellow, and lithium-rich tourmalines are almost any color: blue, green, red, yellow, pink, etc. Rarely, it is colorless. Bi-colored and multicolored crystals are common, reflecting variations of fluid chemistry during crystallization. Crystals may be green at one end and pink at the other, or green on the outside and pink inside; this type is called watermelon tourmaline. Some forms of tourmaline are dichroic, in that they change color when viewed from different directions.

All colored Tourmaline gems display pleochroism, meaning their color changes when viewed at different angles. In some Tourmaline gems, this effect is hardly noticeable, while in others it is strongly apparent. Gemstone cutters must take this into account when cutting a Tourmaline, so that the finished gem brings out its best color.

Only 4 species of tourmaline are of real importance to gemologists.


The most common species of tourmaline is schorl, the sodium iron (divalent) endmember of the group. It may account for 95% or more of all tourmaline in nature. Opaque black schorl and yellow tsilaisite are idiochromatic tourmaline species that have high magnetic susceptibilities due to high concentrations of iron and manganese respectively. Schorl is exclusively black and, unlike other Tourmaline forms, is never transparent or even translucent. Schorl is the most common form of Tourmaline. It Usually as elongated prismatic crystals that are heavily striated. Also as short, stubby, prismatic crystals.

Elbaite is the most well-known and valuable form of Tourmaline. Most of the multicolored Tourmalines and almost all of the Tourmaline gemstones are of the Elbaite variety. Elbaite is allochromatic, meaning trace amounts of impurities can tint crystals, and it can be strongly pleochroic. Every color of the rainbow may be represented by elbaite, some exhibiting multicolor zonation. Microscopic acicular inclusions in some elbaite crystals show the Cat's eye effect in polished cabochons.

Liddicoatite was not recognized as a separate Tourmaline species until 1977. Prior to that time, it was thought to be Elbaite. The color is usually smoky brown, but also pink, red, green, blue, or rarely white. Color zoning is abundant at the type locality, parallel to pyramid faces. This is due to changes in the solution during crystal growth.


There are many, mainly color, varieties of these species.


See also:
Benitoite: The Rarest Gemstone Found Only in California
Garnet Group: The Colors and Varieties of Garnet
The Different Beryl Varieties with Photos
How Does a Trapiche Emerald Form?