The Terminology of Coated Grains in Limestone

Ooid (oolith) - a spherical to ellipsoidal grain, 0.25 to 2.00 mm in diameter, with a nucleus covered by one or more precipitated concentric coatings (cortical layers) with radial and/or concentric orientation of constituent crystals. Nuclei typically consist of detrital terrigenous grains, skeletal fragments, or pellets and peloids, and coatings can have a variety of compositions. A rock composed dominantly of ooids is termed an “oolite”. That term is commonly misused, however, to describe the constituent ooid grains.

Spastolith or deformed ooid - An ooid or other coated grain that has been deformed, generally by shearing the concentric laminations away from each other or from the nucleus. In rarer cases, the deformation is tectonic.

Superficial ooid - An ooid with an incomplete or very thin cortical coating; specifically one in which the thickness of the accretionary coating is less, commonly far less, than the radius of the nucleus.vlarger than 2 mm and (in some usages) less than 10 mm in diameter.
A pisolite is a rock containing abundant pisoids.

Oncoid - In North American usage, an oncoid is a coated grain of algal (but not red algal) or microbial origin that is coarser than 2 mm in diameter; a spheroidal form of microbial stromatolite showing a series of concentric (often irregular or scalloped) laminations. These unattached stromatolites are produced by mechanical turning or rolling, exposing new surfaces to microbial/algal growth. Common European usage is less genetic, and in that usage a microbial/algal origin is not a prerequisite. An oncolite is a rock composed of oncoids; the term, however, is often used improperly as a synonym for “oncoid”.


Rhodoid (rhodolith) - An irregularly laminated calcareous nodule composed of encrusting coralline algae arranged in more or less concentric layers about a core; spheroidal but knobby surfaced, and up to several centimeters in diameter; form in warm to cool, clear, shallow sea water down to depths of 150-200 m. 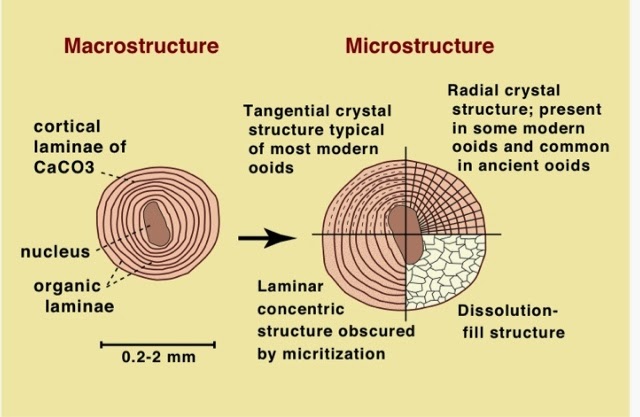