Hotspots the Hottest places on Earth


The places known as hotspots or hot spots in geology are volcanic regions thought to be fed by underlying mantle that is anomalously hot compared with the mantle elsewhere. They may be unanimously hot, and provide a great deal of molten magma. They may be on, near to, or far from tectonic plate boundaries. There are two hypotheses to explain them. One suggests that they are due to hot mantle plumes that rise as thermal diapirs from the core-mantle boundary. The other hypothesis postulates that it is not high temperature that causes the volcanism, but lithospheric extension that permits the passive rising of melt from shallow depths. 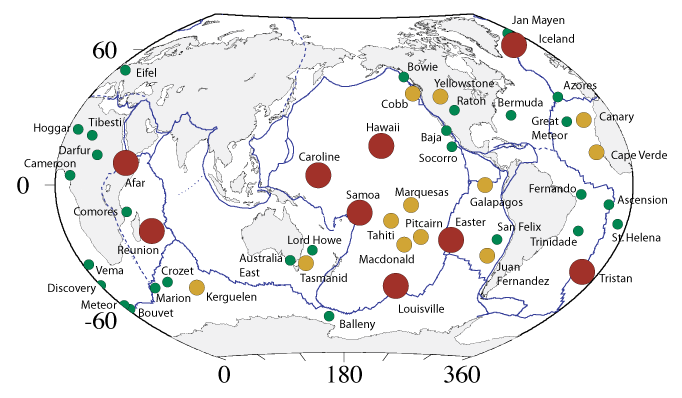 An example of mantle plume locations suggested by one recent group.

Hotspot volcanoes are considered to have a fundamentally different origin from island arc volcanoes. The latter form over subduction zones, at converging plate boundaries. When one oceanic plate meets another, the denser plate is forced downward into a deep ocean trench. This plate, as it is subducted, releases water into the base of the over-riding plate, and this water mixes with the rock, thus changing its composition causing some rock to melt and rise. It is this that fuels a chain of volcanoes, such as the Aleutian Islands, near Alaska.