Rock Outcrops on Mars and Earth . 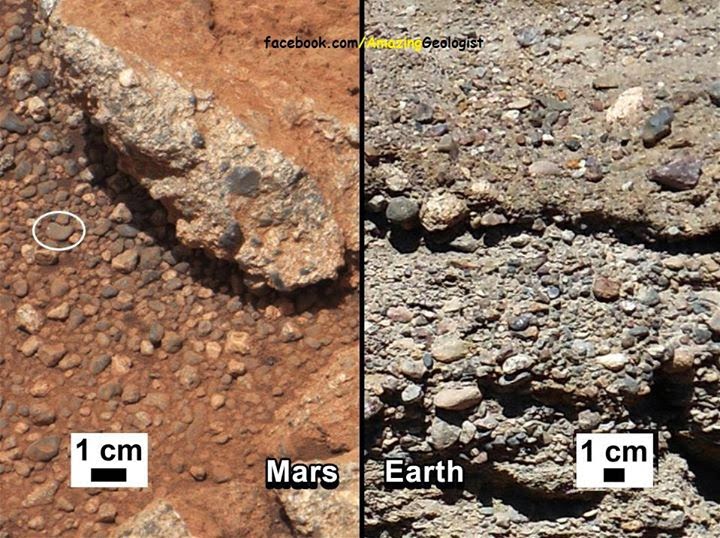 This set of images compares the Link outcrop of rocks on Mars (left) with similar rocks seen on Earth (right). The image of Link, obtained by NASA's Curiosity rover, shows rounded gravel fragments, or clasts, up to a couple inches (few centimeters), within the rock outcrop. Erosion of the outcrop results in gravel clasts that fall onto the ground, creating the gravel pile at left. The outcrop characteristics are consistent with a sedimentary conglomerate, or a rock that was formed by the deposition of water and is composed of many smaller rounded rocks cemented together. A typical Earth example of sedimentary conglomerate formed of gravel fragments in a stream is shown on the right.

An annotated version of the image highlights a piece of gravel that is about 0.4 inches (1 centimeter) across. It was selected as an example of coarse size and rounded shape. Rounded grains (of any size) occur by abrasion in sediment transport, by wind or water, when the grains bounce against each other. Gravel fragments are too large to be transported by wind. At this size, scientists know the rounding occurred in water transport in a stream.
Share to: