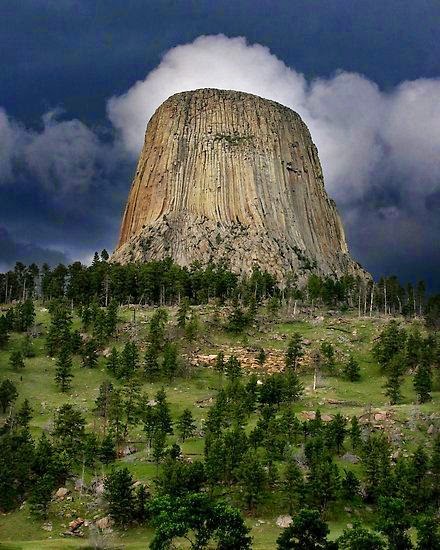 Devil's Tower is an igneous intrusion or laccolith in the Bear Lodge Mountains (part of the Black Hills) near Hulett and Sundance in Crook County, northeastern Wyoming, above the Belle Fourche River. It rises dramatically 1,267 feet (386 m) above the surrounding terrain and the summit is 5,114 feet (1,559 m) above sea level.

The landscape surrounding Devils Tower is composed mostly of sedimentary rocks. The oldest rocks visible in Devils Tower National Monument were laid down in a shallow sea during the Triassic period, 225 to 195 million years ago. This dark red sandstone and maroon siltstone, interbedded with shale, can be seen along the Belle Fourche River. Oxidation of iron minerals causes the redness of the rocks. This rock layer is known as the Spearfish Formation.

Above the Spearfish formation is a thin band of white gypsum, called the Gypsum Springs Formation. This layer of gypsum was deposited during the Jurassic period, 195 to 136 million years ago.

Created as sea levels and climates repeatedly changed, gray-green shales (deposited in low-oxygen environments such as marshes) were interbedded with fine-grained sandstones, limestones, and sometimes thin beds of red mudstone. This composition, called the Stockade Beaver member, is part of the Sundance Formation. The Hulett Sandstone member, also part of the Sundance formation, is composed of yellow fine-grained sandstone. Resistant to weathering, it forms the nearly vertical cliffs which encircle the Tower itself.

During the Paleogene Period, around 50 to 60 million years ago, the Rocky Mountains and the Black Hills were uplifted. Magma rose through the crust, intruding into the existing sedimentary rock layers.