The Terminology of Convergent Plat Boundary 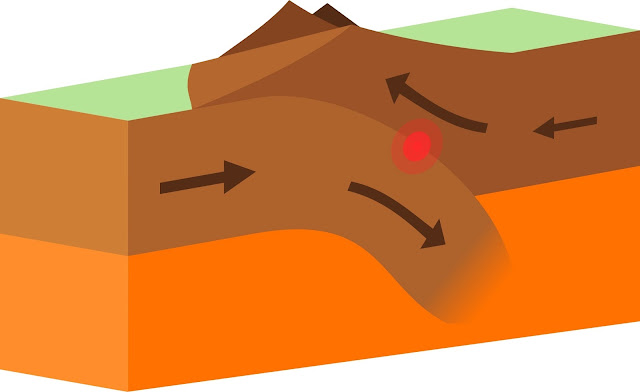 Accretionary prism A wedge of deformed sediment, and locally deformed basalt, that forms along the edge of the overriding slab; the material of the accretionary prism consists of pelagic sediment and oceanic basalt scraped off the downgoing plate, as well as sediment that has collected in the trench.

Backarc basin A narrow ocean basin located between an island arc and a continental margin.

Backarc region A general term for the region that is on the opposite side of the volcanic arc from the trench.

Continental arc A volcanic arc that has been built on continental crust.

Convergent plate boundary The surface between two plates where one plate subducts beneath another; as a consequence of subduction, oceanic lithosphere is consumed.

Coupled subduction A type of subduction in which the overriding plate is pushing tightly against the downgoing plate.


Décollement Synonym for detachment; the term is French.

Detachment A basal fault zone of a fault system; in accretionary prisms it marks the top of the downgoing plate.

Downgoing slab (plate) Oceanic lithosphere that descends into the mantle beneath the overriding plate.

Forearc region A general term for region on the trench side of a volcanic arc.

Island arc A volcanic arc built on oceanic lithosphere; the arc consists of a chain of active volcanic islands.

Marginal sea Synonym for a backarc basin that is underlain by ocean lithosphere.

Mélange A rock composed of clasts of variable origin distributed in a muddy matrix.

Oceanic plateau A broad region where seafloor rises to a shallower depth. It is underlain by anomalously thick oceanic crust, probably formed above a large mantle plume.

Offscraping The process of scraping sediment and rock off the downgoing slab at the toe of the accretionary prism.

Outer swell A broad arch that develops outboard of the trench, in response to flexural bending of the
lithosphere at the trench.

Overriding plate (slab) The plate beneath which another plate is being subducted at a convergent plate boundary.

Rollback The seaward migration of the bend in the downgoing plate as subduction progresses.

Subduction The process by which one plate sinks into the mantle beneath another. Subduction complex Synonym for accretionary wedge.

Underplating In the context of subduction, this is the process of scraping of material from the downgoing slab beneath the accretionary prism, so that the material attaches to the base of the prism. 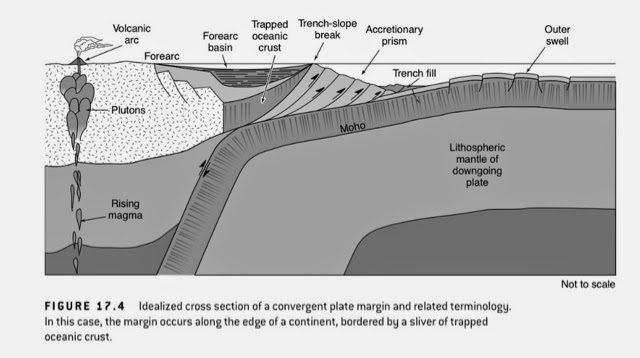 Earth Structure: An Introduction to Structural Geology and Tectonics
Share to: