Petrophysics: The Study of Physical and Chemical Rock Properties

Is the study of physical and chemical rock properties and their interactions with fluids.A major application of petrophysics is in studying reservoirs for the hydrocarbon industry. Petrophysicists are employed to help reservoir engineers and geoscientists understand the rock properties of the reservoir, particularly how pores in the subsurface are interconnected, controlling the accumulation and migration of hydrocarbons. Some of the key properties studied in petrophysics are lithology, porosity, water saturation, permeability and density. 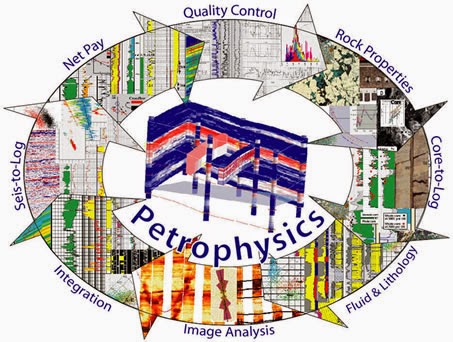 Most petrophysicists are employed to compute what are commonly called conventional (or reservoir) petrophysical properties. These are:

Lithology: A description of the rock's physical characteristics, such as grain size, composition and texture. By studying the lithology of local geological outcrops and core samples, geoscientists can use a combination of log measurements, such as natural gamma, neutron, density and resistivity, to determine the lithology down the well.

The percentage of a given volume of rock that is pore space and can therefore contain fluids. This is typically calculated using data from an instrument that measures the reaction of the rock to bombardment by neutrons or by gamma rays but can also be derived from sonic and NMR logging.

Water saturation: The fraction of the pore space occupied by water. This is typically calculated using data from an instrument that measures the resistivity of the rock and is known by the symbol

Permeability: The quantity of fluid (usually hydrocarbon) that can flow through a rock as a function of time and pressure, related to how interconnected the pores are. Formation testing is so far the only tool that can directly measure a rock formation's permeability down a well.

Thickness of rock with enough permeability to deliver fluids to a well bore. This property is often called “Net reservoir rock.” In the oil and gas industry, another quantity “Net Pay” is computed which is the thickness of rock that can deliver hydrocarbons to the well bore at a profitable rate.

Reservoir models are built upon their measured and derived properties to estimate the amount of hydrocarbon present in the reservoir, the rate at which that hydrocarbon can be produced to the Earth’s surface through wellbores and the fluid flow in rocks. In the water resource industry, similar models are used to compute how much water can be produced to the surface over long periods of time, without depleting the aquifer.

Coring and core analysis is a direct measurement of petrophysical properties. In the petroleum industry rock samples are retrieved from subsurface and measured by core labs of oil company or some commercial core measurement service companies. This process is time consuming and expensive, thus can not be applied to all the wells drilled in a field. 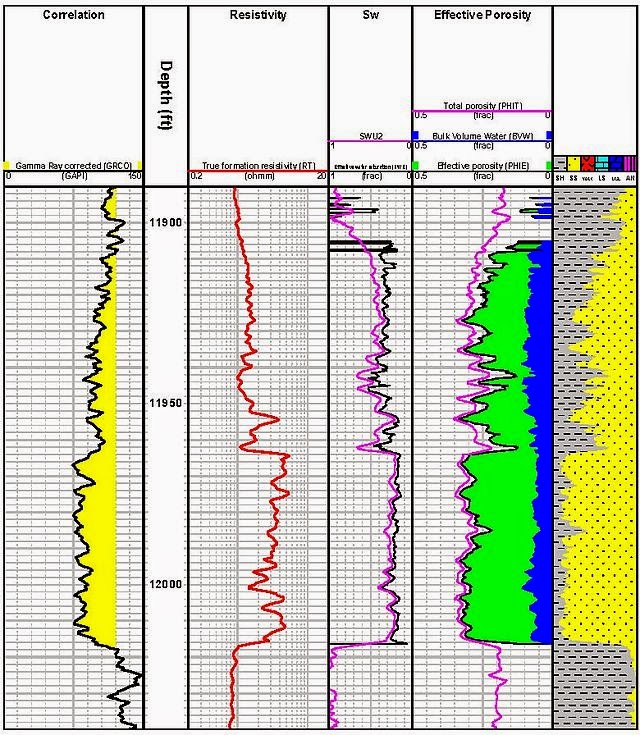 An example of wireline logs is shown in Figure 1. The first “track”, shows the natural gamma radiation level of the rock. The gamma radiation level “log” shows increasing radiation to the right and decreasing radiation to the left. The rocks emitting less radiation have more yellow shading. The detector is very sensitive and the amount of radiation is very low. In clastic rock formations, rocks that have smaller amounts of radiation are more likely to be coarser grained and have more pore space, rocks with higher amounts of radiation are more likely to have finer grains and less pore space.
The second track over in the plot records the depth below the reference point which is usually the Kelly bush or rotary table in feet, so these rocks are 11,900 feet below the surface of earth.

In the third track, the electrical resistivity of the rock is presented. The water in this rock is salty and the salt in the water causes the water to be electrically conductive such that lower resistivity is caused by increasing water saturation and decreasing hydrocarbon saturation.


The fourth track, shows the computed water saturation, both as “total” water (including the water bound to the rock) in magenta and the “effective water” or water that is free to flow in black. Both quantities are given as a fraction of the total pore space.

The fifth track shows the fraction of the total rock that is pore space, filled with fluids. The display of the pore space is divided into green for oil and blue for movable water. The black line shows the fraction of the pore space which contains either water or oil that can move, or be “produced.” In addition to the what is included in blackline, the magenta line includes the water that is permanently bound to the rock.