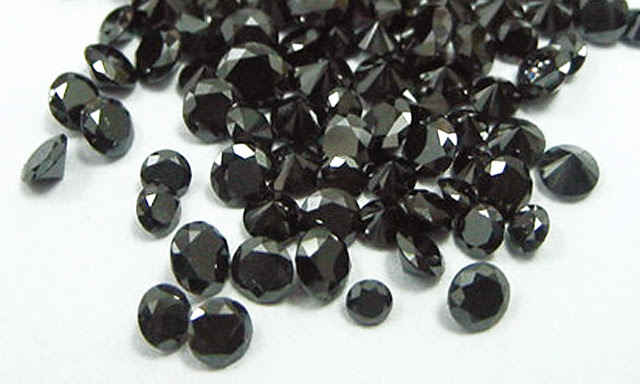 If indeed "a diamond is forever," the most primitive origins of Earth's so-called black diamonds were in deep, universal time, geologists have discovered. Black diamonds came from none other than interstellar space.

"Trace elements critical to an 'ET' origin are nitrogen and hydrogen," said Haggerty. The presence of hydrogen in the carbonado diamonds indicates an origin in a hydrogen-rich interstellar space, he and colleagues believe.

The term carbonado was coined by the Portuguese in Brazil in the mid-18th century; it's derived from its visual similarity to porous charcoal. Black diamonds are found only in Brazil and the Central African Republic.

"Conventional diamonds are mined from explosive volcanic rocks [kimberlites] that transport them from depths in excess of 100 kilometers to the Earth's surface in a very short amount of time," said Sonia Esperanca, program director in the National Science Foundation's Division of Earth Sciences, which funded the research. "This process preserves the unique crystal structure that makes diamonds the hardest natural material known."

From Australia to Siberia, from China to India, the geological settings of conventional diamonds are virtually identical, said Haggerty. None of them are compatible with the formation of black diamonds.

Approximately 600 tons of conventional diamonds have been mined, traded, polished and adorned since 1900. "But not a single black/carbonado diamond has been discovered in the world's mining fields," Haggerty said.

The new data support earlier research by Haggerty showing that carbonado diamonds formed in stellar supernovae explosions. Black diamonds were once the size of asteroids, a kilometer or more in diameter when they first landed on Earth.


The above story is based on materials provided by National Science Foundation.
The Largest black diamond ever found.
Share to: