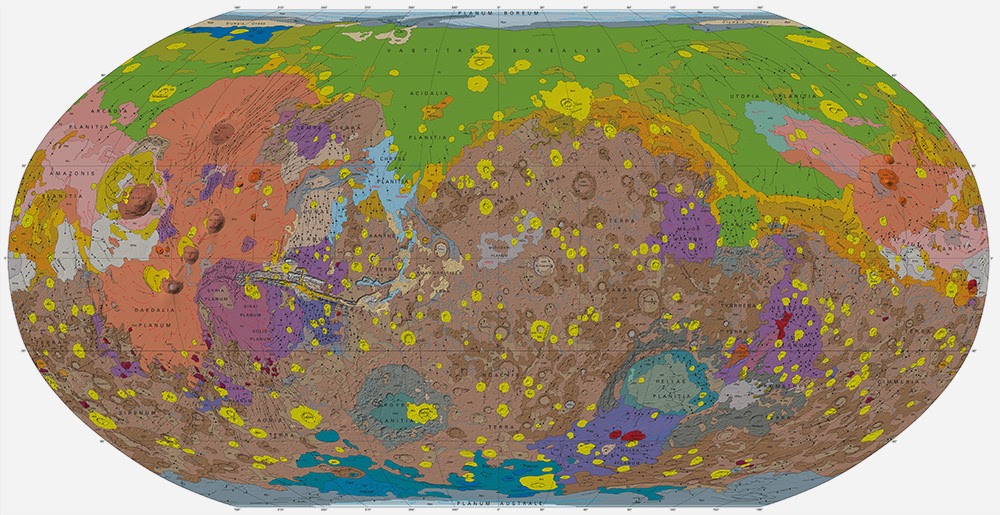 It took 16 years and data from four orbiting spacecraft to assemble, but the U.S. Geological Survey’s new map of Mars is awesome. In beautiful color and excellent detail, the map shows the geology of the Red Planet’s surface today, and reveals a new understanding of its past.
Mars is Earth’s most similar neighbor and the only other planet in our sun’s habitable zone (orbits at the right distance to be a livable temperature and sustain liquid water). Humans have been studying the surface of Mars with ground-based telescopes for around 400 years. But it was the Mariner 9 mission and the Viking Orbiter missions that gave us our first global views of Mars and led to the first complete geologic maps of Mars (in 1978 and 1986-87)—the first of any planetary surface beyond Earth and the moon.
The onslaught of up-close exploration in recent years has yielded a ton of information. The Mars Global Surveyor, Mars Odyssey,Mars Express and Mars Reconnaissance Orbiter missions have pored over the planet’s surface with a bunch of different sensors that can detect everything from the types of minerals present on the surface, to the amount of water vapor in the atmosphere, to the structure of the shallow subsurface. These orbiters showed that much of the planet’s surface is older than scientists thought. The area formed more than 4 billion years ago (the darkest brown on the map) is three times as large. The new map also backs up the idea that Mars was geologically active until recently, and that liquid water once was present on the surface.
The new Mars map is one of several recent astro-geologic map revisions, including for two of Jupiter’s moons, Ganymede and Io.
Download the Map