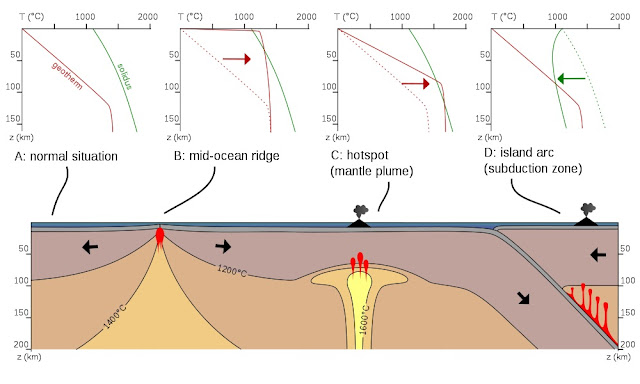 Geothermal gradient is the rate of increasing temperature with respect to increasing depth in the Earth's interior. Away from tectonic plate boundaries, it is about 25 °C per km of depth (1 °F per 70 feet of depth) in most of the world. Strictly speaking, geo-thermal necessarily refers to the Earth but the concept may be applied to other planets.

The Earth's internal heat comes from a combination of residual heat from planetary accretion, heat produced through radioactive decay, and possibly heat from other sources. The major heat-producing isotopes in the Earth are potassium-40, uranium-238, uranium-235, and thorium-232. At the center of the planet, the temperature may be up to 7,000 K and the pressure could reach 360 GPa(3.6 million atm).

Because much of the heat is provided by radioactive decay, scientists believe that early in Earth history, before isotopes with short half-lives had been depleted, Earth's heat production would have been much higher. Heat production was twice that of present-day at approximately 3 billion years ago, resulting in larger temperature gradients within the Earth, larger rates of mantle convection and plate tectonics, allowing the production of igneous rocks such as komatiites that are not formed anymore today.

Heat from Earth's interior can be used as an energy source, known as geothermal energy. The geothermal gradient has been used for space heating and bathing since ancient Roman times, and more recently for generating electricity.

As the human population continues to grow, so does energy use and the correlating environmental impacts that are consistent with global primary sources of energy. This has caused a growing interest in finding sources of energy that are renewable and have reduced greenhouse gas emissions. In areas of high geothermal energy density, current technology allows for the generation of electrical power because of the corresponding high temperatures.

Generating electrical power from geothermal resources requires no fuel while providing true baseload energy at a reliability rate that constantly exceeds 90%. In order to extract geothermal energy, it is necessary to efficiently transfer heat from a geothermal reservoir to a power plant, where electrical energy is converted from heat.

On a worldwide scale, the heat stored in Earth's interior provides an energy that is still seen as an exotic source. About 10 GW of geothermal electric capacity is installed around the world as of 2007, generating 0.3% of global electricity demand. An additional 28 GW of direct geothermal heating capacity is installed for district heating, space heating, spas, industrial processes, desalination and agricultural applications.