How to Classify Igneous Rocks Into (Ultramafic, Mafic, Intermediate and Felsic)? 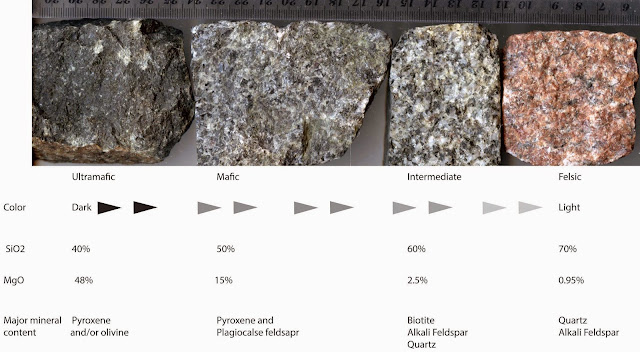 Geologists traditionally divide the compositions of the igneous rocks into four major groups or families.

Their low silica and gas contents make them very fluid; i.e., they have a low viscosity, or resistance to flow. Ultramafic rocks are given names depending on whether they are intrusive or extrusive.

It is very rarely exposed at the surface. Chunks of peridotite, however, are often brought up by other magmas (of the mafic family- see below). These included chunks are called inclusions or xenoliths (meaning "foreign rock"). Komatiites, the extrusive equivalents of peridotite are relatively rare. They are significant, though, in that most of them are older than about 2 billion years (2 Ga where "Ga" stands for Giga-annum). Because these magmas require the most heat to form, it is inferred that the Earth has cooled down since 2 Ga so that these magmas can no longer form.

Rocks composed mostly of pyroxene, calcium-rich plagioclase, and minor amounts of olivine make up the mafic family of igneous rocks. The mafic magmas are somewhat more viscous than the ultramafic magmas, but they are still fairly fluid.

Mafic rocks are produced in a variety of plate tectonic settings (divergent plate boundaries such as mid-ocean ridges, continental rifts such as our own Basin and Range Province in Arizona, and mantle hot spots like Hawaii).

Mafic rocks, regardless of tectonic setting, have one thing in common. All are produced by partial melting of the uppermost asthenosphere. Because of their relatively low viscosity, mafic lavas may travel great distances and "flood" the landscapes over which they flow.

Felsic rocks are produced primarily in convergent plate boundaries in which an oceanic plate is subducting beneath either another oceanic plate (such as in Japan) or a continental plate (such as along the Andes Mountains of South America). Because of their high viscosity, felsic magmas do not reach the surface as often as do intermediate or mafic magmas. However, because of its high gas content, when felsic magma does erupt, the eruption is the most violent.

The explosive eruption often results in the emplacement of ashflow tuffs and volcanic breccias. Rhyolites tend to form domes or plugs rather than extensive lava flows. In addition, the viscosity of the magma hinders crystal growth. Consequently, obsidian or volcanic glass is most common in the cooling of felsic lavas.

Top 7 Differentials between Sedimentary rocks and Igneous rocks
Share to: