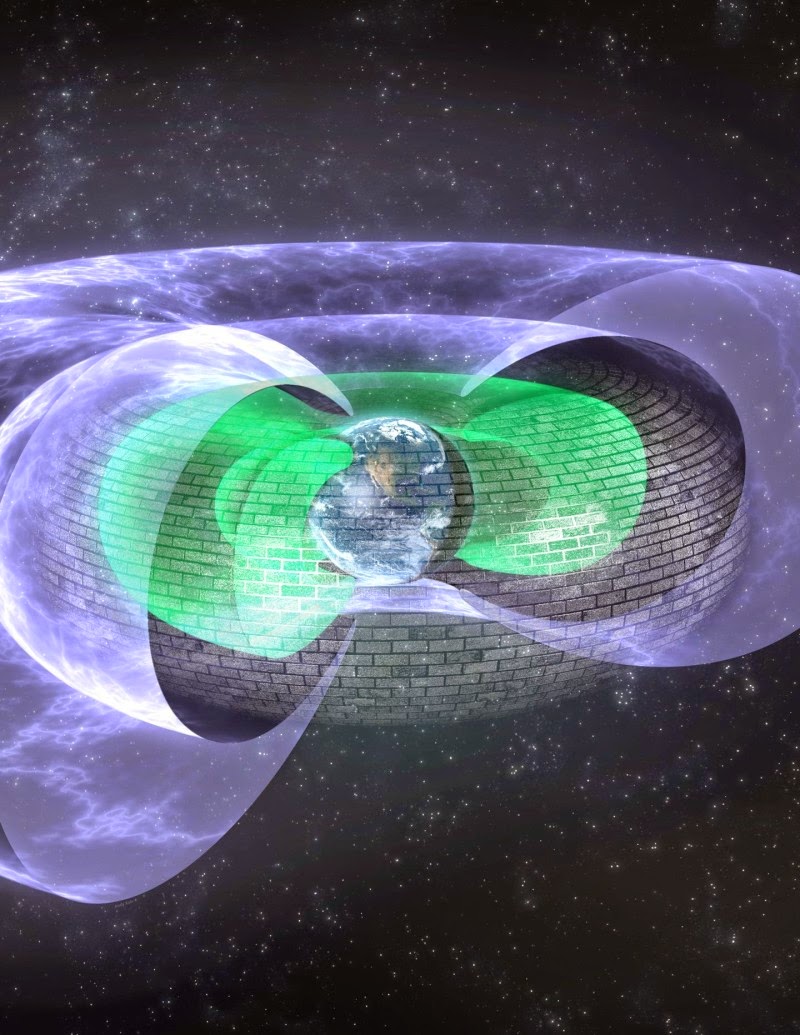 The barrier to the particle motion was discovered in the Van Allen radiation belts, two doughnut-shaped rings above Earth that are filled with high-energy electrons and protons, said Distinguished Professor Daniel Baker, director of CU-Boulder's Laboratory for Atmospheric and Space Physics (LASP). Held in place by Earth's magnetic field, the Van Allen radiation belts periodically swell and shrink in response to incoming energy disturbances from the sun.
As the first significant discovery of the space age, the Van Allen radiation belts were detected in 1958 by Professor James Van Allen and his team at the University of Iowa and were found to be composed of an inner and outer belt extending up to 25,000 miles above Earth's surface. In 2013, Baker -- who received his doctorate under Van Allen -- led a team that used the twin Van Allen Probes launched by NASA in 2012 to discover a third, transient "storage ring" between the inner and outer Van Allen radiation belts that seems to come and go with the intensity of space weather.
The latest mystery revolves around an "extremely sharp" boundary at the inner edge of the outer belt at roughly 7,200 miles in altitude that appears to block the ultrafast electrons from breeching the shield and moving deeper towards Earth's atmosphere.
"It's almost like theses electrons are running into a glass wall in space," said Baker, the study's lead author. "Somewhat like the shields created by force fields on Star Trek that were used to repel alien weapons, we are seeing an invisible shield blocking these electrons. It's an extremely puzzling phenomenon."
A paper on the subject was published in the Nov. 27 issue of Nature.
The team originally thought the highly charged electrons, which are looping around Earth at more than 100,000 miles per second, would slowly drift downward into the upper atmosphere and gradually be wiped out by interactions with air molecules. But the impenetrable barrier seen by the twin Van Allen belt spacecraft stops the electrons before they get that far, said Baker.
The group looked at a number of scenarios that could create and maintain such a barrier. The team wondered if it might have to do with Earth's magnetic field lines, which trap and control protons and electrons, bouncing them between Earth's poles like beads on a string. The also looked at whether radio signals from human transmitters on Earth could be scattering the charged electrons at the barrier, preventing their downward motion. Neither explanation held scientific water, Baker said.
"Nature abhors strong gradients and generally finds ways to smooth them out, so we would expect some of the relativistic electrons to move inward and some outward," said Baker. "It's not obvious how the slow, gradual processes that should be involved in motion of these particles can conspire to create such a sharp, persistent boundary at this location in space."
Another scenario is that the giant cloud of cold, electrically charged gas called the plasmasphere, which begins about 600 miles above Earth and stretches thousands of miles into the outer Van Allen belt, is scattering the electrons at the boundary with low frequency, electromagnetic waves that create a plasmapheric "hiss," said Baker. The hiss sounds like white noise when played over a speaker, he said.
While Baker said plasmaspheric hiss may play a role in the puzzling space barrier, he believes there is more to the story. "I think the key here is to keep observing the region in exquisite detail, which we can do because of the powerful instruments on the Van Allen probes. If the sun really blasts Earth's magnetosphere with a coronal mass ejection (CME), I suspect it will breach the shield for a period of time," said Baker, also a faculty member in the astrophysical and planetary sciences department.
"It's like looking at the phenomenon with new eyes, with a new set of instrumentation, which give us the detail to say, 'Yes, there is this hard, fast boundary,'" said John Foster, associate director of MIT's Haystack Observatory and a study co-author.

The above story is based on materials provided by University of Colorado at Boulder. Note: Materials may be edited for content and length.