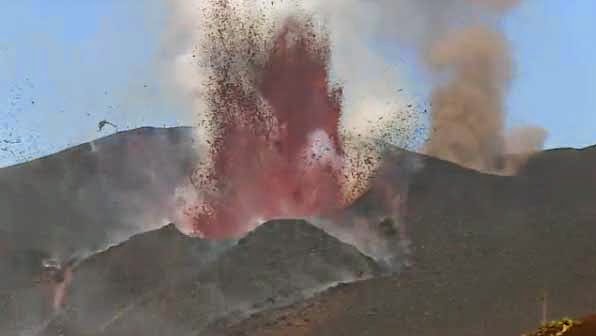 Molten lava from a volcano in the Cape Verde archipelago slid towards the town of Cha das Caldeiras on Thursday, threatening to destroy it and a nearby village four days after an initial eruption.

Television images showed a huge lake of steaming black lava just meters away from houses in the village of Portela. The village is close to Cha das Caldeiras, whose 1,200-strong population has been evacuated to emergency shelters.

"In the last few hours, there was an increase in volcanic activity and the lava is flowing towards Portela and this community may be completely engulfed by lava," Prime Minister Jose Maria Neves said on Thursday during a visit to Fogo.

"The potential is for the total destruction of Cha das Caldeiras, one of the most fertile regions of Cape Verde," he added, calling on international aid for the country.

Experts from Portugal and the Canary Islands have already arrived to evaluate the seismic activity.

The arid, former Portuguese colony is located about 600 km (400 miles) off the coast of Senegal. Fogo's volcanic peak, surrounded by vineyards, is a favorite hiking destination.
Share to: