10 Most Beneficial Minerals and Why 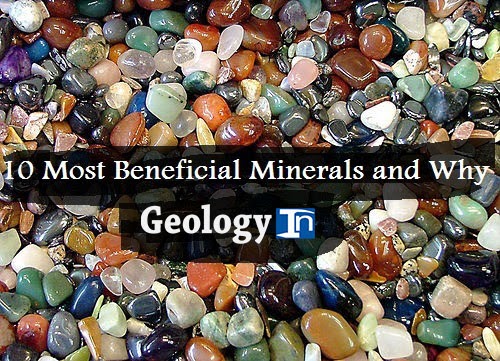 Aluminum in bauxite is hosted by aluminum hydroxide minerals, mostly gibbsite. Archaically called hydrate of alumina or alumina trihydrate (Al2O3·3H2O), is found in nature as the mineral gibbsite (also known as hydrargillite) and its three, much more rare polymorphs: bayerite, doyleite and nordstrandite. Closely related are aluminium oxide hydroxide, AlO(OH), and aluminium oxide, Al2O3, differing only by loss of water. 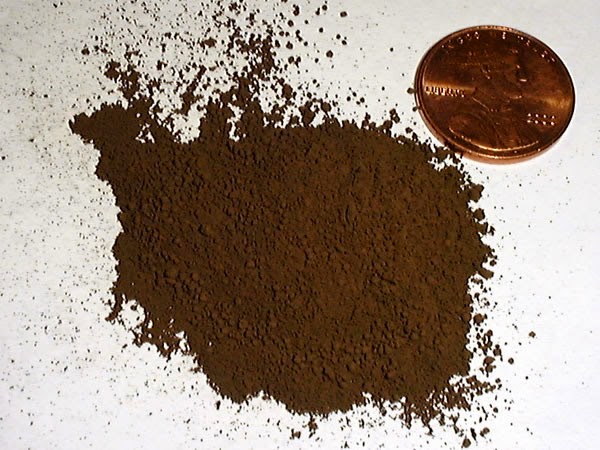 Iron oxides and oxide-hydroxides are widespread in nature, play an important role in many geological and biological processes, and are widely used by humans, e.g., as iron ores, pigments, catalysts, in thermite (see the diagram) and hemoglobin. Common rust is a form of iron(III) oxide. Iron oxides are widely used as inexpensive, durable pigments in paints, coatings and colored concretes. Colors commonly available are in the "earthy" end of the yellow/orange/red/brown/black range.

Copper minerals Major source of copper, which is used as an electrical conductor in all sorts of applications.

occurs as native copper or in minerals such as the copper sulfides chalcopyrite and chalcocite, the copper carbonates azurite and malachite, and the copper(I) oxide mineral cuprite.The largest mass of elemental copper discovered weighed 420 tonnes and was found in 1857 on the Keweenaw Peninsula in Michigan, US.

Is a widespread hydrous ferric oxyhydroxide mineral at the Earth's surface, and a likely constituent in extraterrestrial materials. It forms in several types of environments, from freshwater to marine systems, aquifers to hydrothermal hot springs and scales, soils, and areas affected by mining. It can be precipitated directly from oxygenated iron-rich aqueous solutions, or by bacteria either as a result of a metabolic activity or passive sorption of dissolved iron followed by nucleation reactions.

Common natural sorbers of toxic heavy metals and metalloids such as As,, Se, Pb, etc. (hydrous manganese oxides have a similar importance and are probably more important than iron hydroxides in the marine environment).

Known as molecular sieves, zeolites are commonly used in the cracking of petroleum to make gasoline, in chemical catalysis, and as cation exchangers in softening H2O
Zeolites have a porous structure that can accommodate a wide variety of cations, such as Na+, K+, Ca2+, Mg2+ and others. These positive ions are rather loosely held and can readily be exchanged for others in a contact solution. Natural zeolites form where volcanic rocks and ash layers react with alkaline groundwater. Zeolites also crystallize in post-depositional environments over periods ranging from thousands to millions of years in shallow marine basins.  Some of the more common mineral zeolites are analcime, chabazite, clinoptilolite, heulandite, natrolite, phillipsite, and stilbite. An example mineral formula is: Na2Al2Si3O10·2H2O, the formula for natrolite. 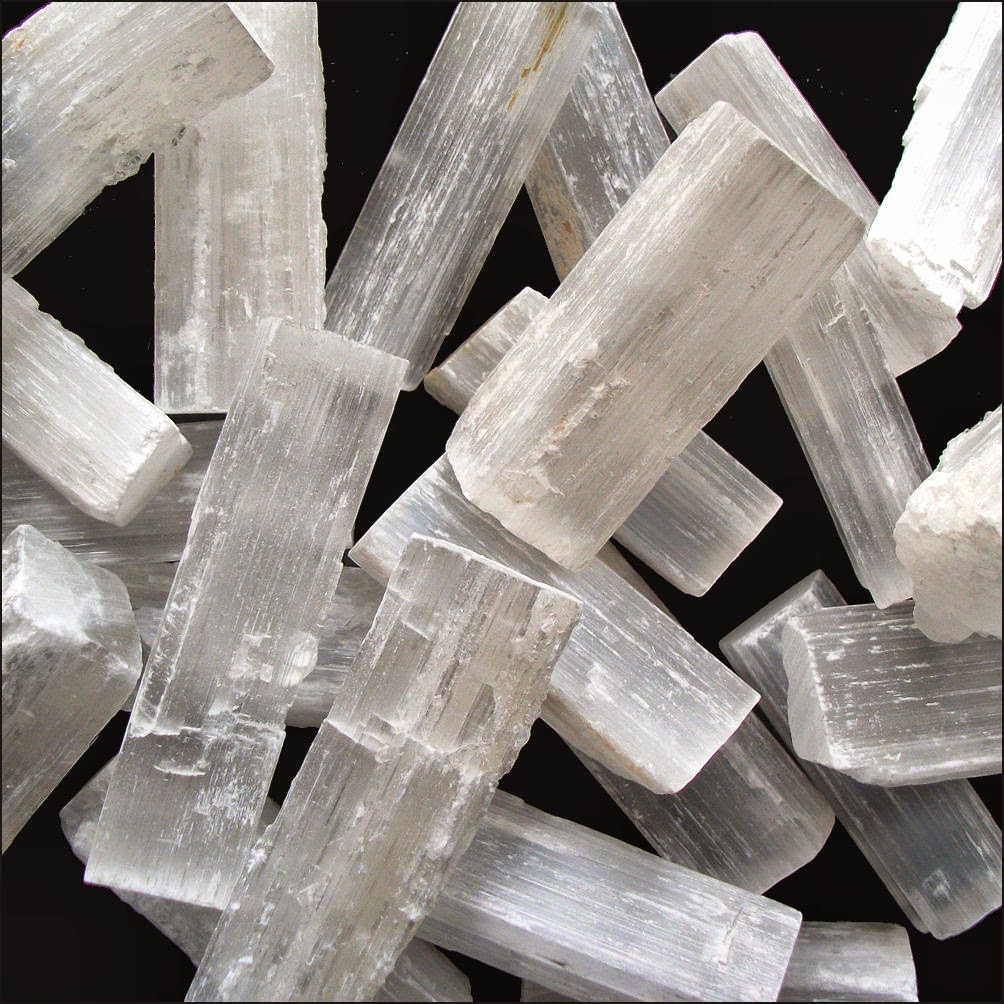 Gypsum is a soft sulfate mineral composed of calcium sulfate dihydrate, with the chemical formula CaSO4·2H2O. It can be used as a fertilizer, is the main constituent in many forms of plaster and is widely mined. A massive fine-grained white or lightly tinted variety of gypsum, called alabaster, has been used for sculpture by many cultures including Ancient Egypt, Mesopotamia, Ancient Rome,Byzantine empire and the Nottingham alabasters of medieval England. It is the definition of a hardness of 2 on the Mohs scale of mineral hardness. It forms as an evaporite mineral and as a hydration product of anhydrite. Gypsum is a common mineral, with thick and extensive evaporite beds in association with sedimentary rocks.


Common salt is a mineral substance composed primarily of sodium chloride (NaCl), a chemical compound belonging to the larger class of ionic salts; salt in its natural form as a crystalline mineral is known as rock salt or halite. Salt is present in vast quantities in the sea where it is the main mineral constituent, with the open ocean having about 35 grams (1.2 oz) of solids per litre, a salinity of 3.5%. Salt is essential for animal life, and saltiness is one of the basic human tastes. The tissues of animals contain larger quantities of salt than do plant tissues; therefore the typical diets of nomads who subsist on their flocks and herds require little or no added salt, whereas cereal-based diets require supplementation. Salt is one of the oldest and most ubiquitous of food seasonings, and salting is an important method of food preservation.

Quartz is the second most abundant mineral in the Earth's continental crust, after feldspar. It is made up of a continuous framework of SiO4 silicon–oxygen tetrahedra, with each oxygen being shared between two tetrahedra, giving an overall formula SiO2.

There are many different varieties of quartz, several of which are semi-precious gemstones. Especially in Europe and the Middle East, varieties of quartz have been since antiquity the most commonly used minerals in the making of jewelry and hardstone carvings.

Essential in the early development of civilization because of its use in cutting tools and weapons (hardness of 7 and conchoidal fracture, producing sharp edges). It is also the primary source of silicon, which is the major chemical component of modern semiconductors (Silicon Valley).


Calcite is a carbonate mineral and the most stable polymorph of calcium carbonate (CaCO3). The other polymorphs are the minerals aragonite and vaterite. Aragonite will change to calcite at 380–470 °C, and vaterite is even less stable.

High-grade optical calcite was used in World War II for gun sights, specifically in bomb sights and anti-aircraft weaponry. Also, experiments have been conducted to use calcite for a cloak of invisibility. Microbiologically precipitated calcite has a wide range of applications, such as soil remediation, soil stabilization and concrete repair.


Phosphate minerals are those minerals that contain the tetrahedrally coordinated phosphate (PO43-) anion along with the freely substituting arsenate (AsO43-) and vanadate(VO43-). Chlorine (Cl-), fluorine (F-), and hydroxide (OH-) anions also fit into the crystal structure. Phosphate rock is a general term that refers to rock with high concentration of phosphate minerals, most commonly of the apatite group. It is the major resource mined to produce phosphate fertilizers for the agriculture sector. Phosphate is also used in animal feed supplements, food preservatives, anti-corrosion agents, cosmetics, fungicides, ceramics, water treatment and metallurgy. 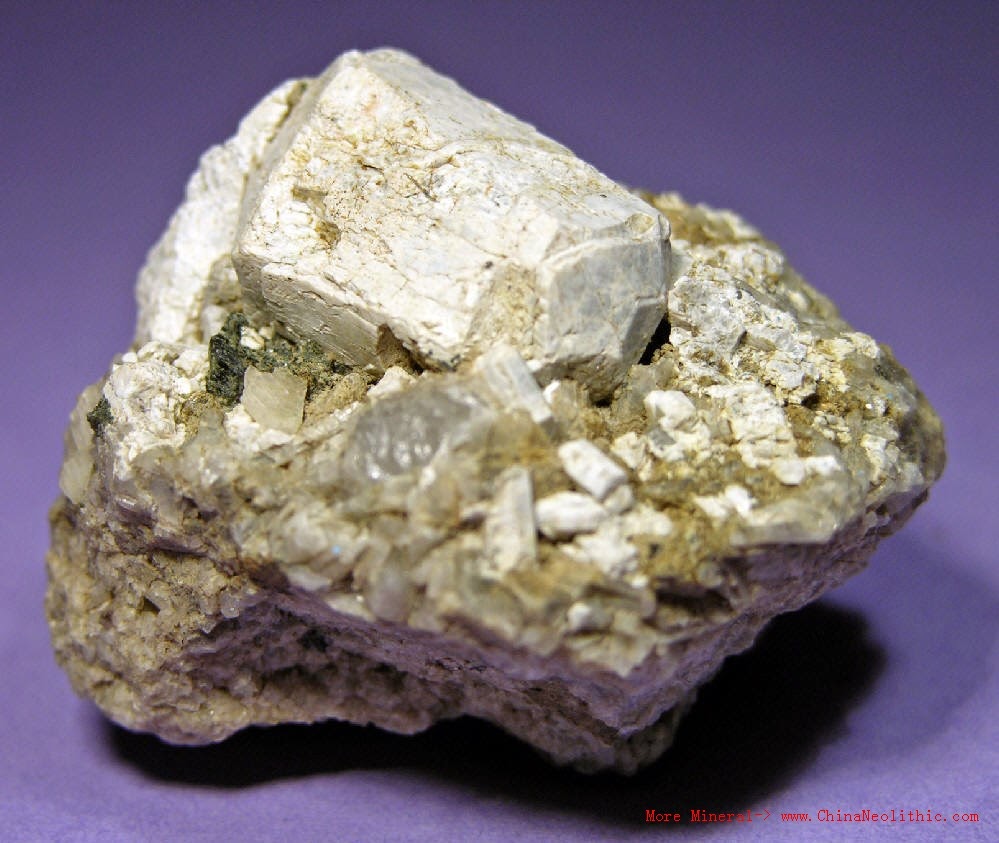 Is a naturally occurring mineral form of calcium apatite with the formula Ca5(PO4)3(OH), but is usually written Ca10(PO4)6(OH)2 to denote that the crystal unit cell comprises two entities. Hydroxylapatite is the hydroxyl endmember of the complex apatite group. Naturally occurring apatites can, however, also have brown, yellow, or green colorations, comparable to the discolorations of dental fluorosis.
Without hydroxyapatite, we would not have bones or teeth (or at least they would be made of a different mineral). (known as bone mineral)

Clay minerals are hydrous aluminium phyllosilicates, sometimes with variable amounts of iron, magnesium, alkali metals, alkaline earths, and other cations found on or near some planetary surfaces. Clay minerals form in the presence of water and have been important to life, and many theories of abiogenesis involve them. They have been useful to humans since ancient times in agriculture and manufacturing.
Without clay minerals, we would have very poor soils that would be incapable of holding nutrient elements like K, nitrogen, and phosphorous, which are necessary for plant growth. Without plants and soils, we wouldn’t be here!


See also:
How to Identify Minerals in 10 Steps (photos)
The Complete Classification of Minerals
How to Read a Geologic Map