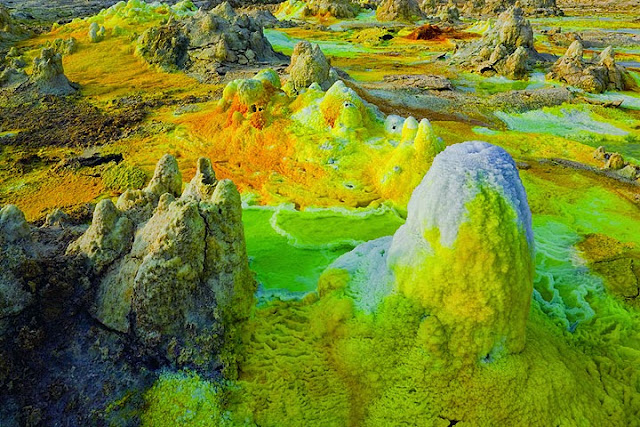 Dallol is a volcanic explosion crater (or maar) in the Danakil Depression, northeast of the Erta Ale Range in Ethiopia. It has been formed by the intrusion of basaltic magma in Miocene salt deposits and subsequent hydrothermal activity.

The Dallol volcano, or rather the Dallol hydrothermal field is located in a remote part of the northern Danakil Depression in NE Ethiopia. It is the lowest known sub-aerial volcanic area in the world. Dallol is one of the world's most spectacular landscape: a vast area of uplifted thick salt deposits affected by intense fumarolic activity, probably caused by an active volcanic system beneath several kilometers of evaporation salt deposits.

Dallol is said to be the hottest place on the planet, with average annual temperatures well above 30 deg C. The area commonly referred to Dallol volcano contains the approx. 1.5 x 3 km wide Dallol "mountain" (rising about 50 m above the great salt lake) near the border with Eritrea, and nearby warm springs including the Yellow Lake, the Black Mountain with the Blue Lake, said to be an explosion crater from a hydrothermal eruption in 1926. 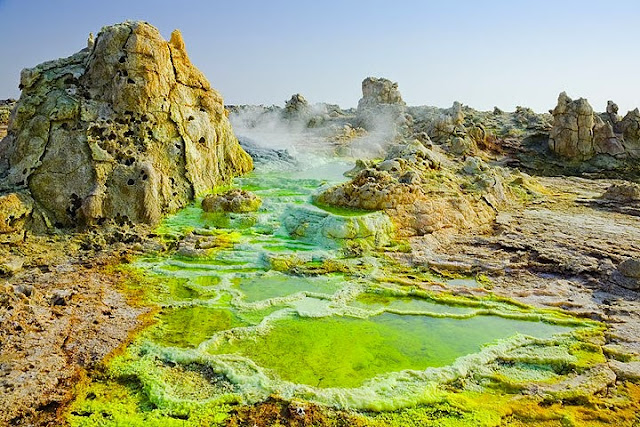