Rocks Vs Minerals: Same or Different? 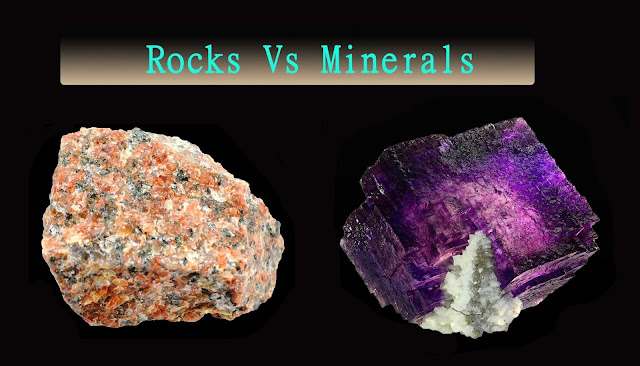 Rocks and minerals are some of the most fascinating and valuable resources known to man. We will examine what they are a little more closely as well as look at some fun facts about them.
Distinct Differences

How are rocks and minerals different? First, a rock is composed of one or more minerals and sometimes mineraloids but do not have a crystal structure.

A mineral is a chemical substance made up of one or more chemicals having a definite crystal structure. Rocks do not have a definite chemical composition whereas minerals do. Sometimes a rock may contain organic remains in it.

A mineral, on the other hand, will never have any organic material present within it. Rocks do not have a definite shape whereas minerals will usually have one. Rocks are classified as igneous, metamorphic and sedimentary.

Minerals are classified as native elements, halides, sulfides, oxides, etc. Another difference between the two is that rocks can be found abundantly on the surface of the Earth in many different regions, but minerals are not as commonly found just anywhere, making it sometimes useful for people to extract minerals from rocks.

Finally, rocks are often found containing fossils of plants and animals within them whereas minerals do not contain any such remains.

Rocks are important for the minerals they contain while minerals are used widely in all areas of the manufacturing industry. Finally, both rocks and minerals serve as raw materials in the industrial process for manufacturing products used for everyday purposes.

There are many interesting and fun facts about rocks and minerals. Here are some of them:
See also:

How to Identify Minerals in 10 Steps (photos)
Top Radioactive Minerals: Occurrence and Identification
Share to: