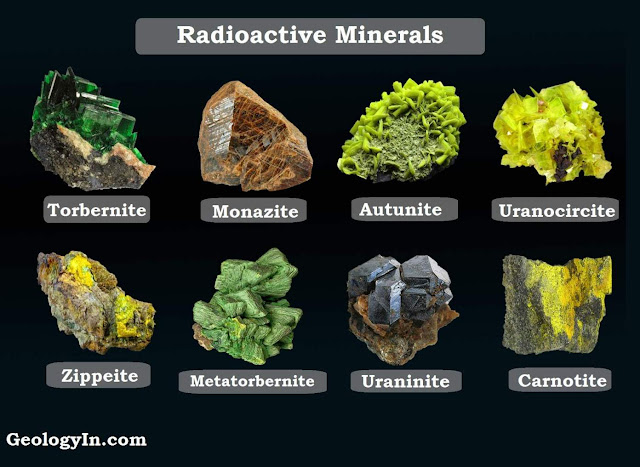 
Autunite is a radioactive orthorhombic mineral which results from the hydrothermal alteration of uranium minerals. Used as a uranium ore, it was first discovered in France in 1852. Autunite is one of the more attractive and popular radioactive minerals. To state the obvious, the uranium in its chemical formula provides this radioactivity. Autunite is probably the most popular uranium mineral for collectors. Its green and yellow color shades seem to glow and are actually fluorescent. The crystal aggregates look like inflated mica books and are very distinctive.

Uraninite is a highly radioactive and interesting mineral. It is the chief ore of uranium and radium, which is found in trace amounts. Helium was first discovered on the earth in samples of uraninite. Radium and helium are found in uraninite because they are the principle products of uranium's decay process. Weathered or otherwise altered uraninite produces some wonderful by-products such as the beautiful uranyl phosphate minerals like autunite and torbernite as well as uranyl silicates like sklodoskite and cuprosklodowskite.

Torbernite is a popular mineral among collectors who seek uranium bearing minerals. Its square tabular crystals are distinctive, but might remind someone of the mineral wulfenite, if not for the green color of torbernite. Autunite is a structurally related mineral that also forms square tabular crystals, but they are not typically solid green and autunite is fluorescent in UV light.

The structure of torbernite is composed of phosphate tetrahedrons linked to uranium-oxygen groups that form distorted octahedrons. The phosphates and uranium groups lie in sheets that are weakly held together by water molecules. This structure produces the tabular habit, the one perfect direction of cleavage and the relative softness.

Zippeite is a rare mineral but is sought after by collectors who seek uranium bearing minerals as well as minerals that have exotic names. Zippeite fluoresces under ultraviolet light. The mineral is inconsistent however in the color that is produced.

Zippeite is formed as a secondary mineral and as an efflorescent crust in uranium mines. Efflorescent means it forms on the surface of a rock by the evaporation of water when in contact with the dry air of the mine. Thus, some zippeite specimens are the result of human intervention (albeit unintentional) and some minerologists do not consider these to be pure mineral specimens. Remember, this is a radioactive mineral and should be stored away from other minerals that are affected by radioactivity and human exposure should be limited.


Meta-torbernite is a dehydration product of its close cousin, torbernite, hence the name. When the mineral torbernite loses water and converts to meta-torbernite, it usually undergoes pseudomorphism. A pseudomorph is generally an atom by atom replacement of one mineral's chemistry to form another mineral.

The process leaves the crystal shape of the original mineral intact. Pseudomorph means false (pseudo) shape (morph). In this case, the conversion is not so dramatic since it involves only the loss of a few water molecules; therefore, a good pseudomorph is likely. The conversion is irreversible and ongoing, and all collection specimens of a certain age are almost certainly partially to totally converted. If accuracy is demanded, all torbernite collection pieces of a few years of age should be labeled as meta-torbenite.

Uranocircite is a rare but popular mineral among collectors who seek uranium-bearing minerals. Its square tabular crystals are distinctive from the members of the autunite/torbernite group of minerals. Uranocircite's crystals are similar to other members of this group, but they tend to be flatter or not as tabular.

Autunite can be difficult to distinguish from uranocircite by ordinary means. However, in the slightly heavier uranocircite, the color is usually more yellow and the fluorescent color is more green.


The structure of uranocircite is composed of phosphate tetrahedrons linked to uranium-oxygen groups that form distorted octahedrons. The phosphates and uranium groups lie in sheets that are weakly held together by water molecules. This structure produces the platy habit, the one perfect direction of cleavage, and the relative softness.

A secondary mineral resulting from the alteration of Uraninite, Montroseite, or Davidite. Occurs in sandstones, especially in paleochannels, near fossil carbonaceous matter, in calcretes and near playas. Carnotite is a relatively uncommon mineral, yet common enough to be an important ore of uranium and vanadium. Uranium and vanadium are two extremely strategic metals. Named in 1899 by Charles Friedel and Édouard Cumenge in honor of Marie-Adolphe Carnot.

See also:
10 Most Rare Gemstones in the World Rarer than a Diamond
The world's 10 Most Deadly  Minerals
How to Identify Minerals in 10 Steps (photos)
Share to: