Why we live on Earth and not Venus 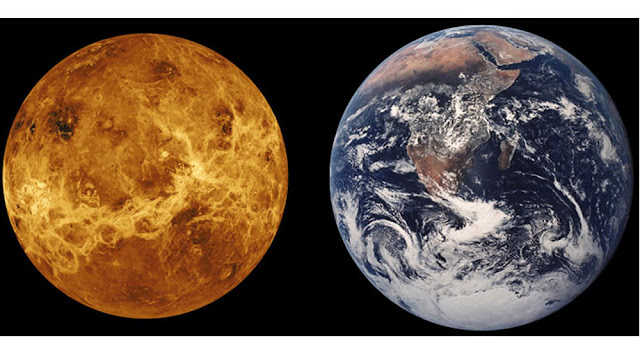 Compared to its celestial neighbors Venus and Mars, Earth is a pretty habitable place. So how did we get so lucky? A new study sheds light on the improbable evolutionary path that enabled Earth to sustain life.

The research, published this week in Nature Geoscience, suggests that Earth's first crust, which was rich in radioactive heat-producing elements such as uranium and potassium, was torn from the planet and lost to space when asteroids bombarded the planet early in its history. This phenomenon, known as impact erosion, helps explain a landmark discovery made over a decade ago about the Earth's composition.
Researchers with the University of British Columbia and University of California, Santa Barbara say that the early loss of these two elements ultimately determined the evolution of Earth's plate tectonics, magnetic field and climate.
"The events that define the early formation and bulk composition of Earth govern, in part, the subsequent tectonic, magnetic and climatic histories of our planet, all of which have to work together to create the Earth in which we live," said Mark Jellinek, a professor in the Department of Earth, Ocean & Atmospheric Sciences at UBC. "It's these events that potentially differentiate Earth from other planets."
On Earth, shifting tectonic plates cause regular overturning of Earth's surface, which steadily cools the underlying mantle, maintains the planet's strong magnetic field and stimulates volcanic activity. Erupting volcanoes release greenhouse gases from deep inside the planet and regular eruptions help to maintain the habitable climate that distinguishes Earth from all other rocky planets.
Venus is the most similar planet to Earth in terms of size, mass, density, gravity and composition. While Earth has had a stable and habitable climate over geological time, Venus is in a climate catastrophe with a thick carbon dioxide atmosphere and surface temperatures reaching about 470 C. In this study, Jellinek and Matt Jackson, an associate professor at the University of California, explain why the two planets could have evolved so differently.
"Earth could have easily ended up like present day Venus," said Jellinek. "A key difference that can tip the balance, however, may be differing extents of impact erosion."
With less impact erosion, Venus would cool episodically with catastrophic swings in the intensity of volcanic activity driving dramatic and billion-year-long swings in climate.
"We played out this impact erosion story forward in time and we were able to show that the effect of the conditions governing the initial composition of a planet can have profound consequences for its evolution. It's a very special set of circumstances that make Earth."

The above post is reprinted from materials provided by University of British Columbia. Note: Materials may be edited for content and length.