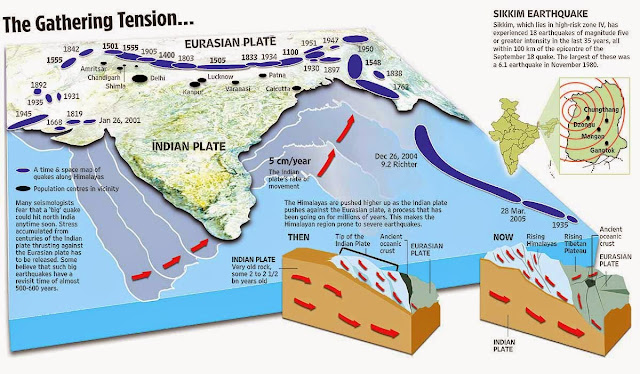 The India tectonic plate moving north at about 45mm a year is pushing under the Eurasian plate beneath the Himalayas.

Two tectonic plates meet beneath the Himalayas along a fault line. The India plate is moving north at around 45mm a year and pushing under the Eurasian plate. Over time that is how the Himalayas were created.
Dr Brian Baptie, head of seismology at the British Geological Survey in Edinburgh, explains the potential after-effects of the quake.

Saturday's catastrophic earthquake in Nepal occurred because of two converging tectonic plates: the India plate and the overriding Eurasia plate to the north, the U.S. Geological Survey said.
Tectonic plates are the large, thin, relatively rigid plates that move relative to one another on the outer surface of the Earth.

Plates are always slowly moving, but they get stuck at their edges due to friction. When the stress on the edge overcomes the friction, there is an earthquake that releases energy in waves that travel through the Earth's crust and cause the shaking that we feel.

At the location of Saturday's earthquake, about 50 miles to the northeast of the Nepalese capital of Kathmandu, the India plate is converging with Eurasia at a rate of about 2 inches per year toward the north-northeast, driving the uplift of the Himalayan mountain range.


The quake had a depth of only 7 miles, which is considered shallow in geological terms, the Associated Press reported. The shallower the quake, the more destructive power it carries.
The earthquake was felt as far away as Lahore in Pakistan, which is more than 700 miles away. It was also felt 380 miles away in Lhasa in Tibet, and 400 miles away in Dhaka, Bangladesh.
Although a major plate boundary with a history of large- to great-sized earthquakes, large quakes in this area are rare in the documented historical era, the U.S. Geological Survey reports. Over the past century, just four events of magnitude-6.0 or larger have occurred within about 150 miles of Saturday's earthquake.

One, a magnitude-6.9 earthquake in August 1988 about 150 miles to the southeast of Saturday's quake, caused nearly 1,500 fatalities, USGS said.


The largest event, a magnitude-8.0 quake known as the 1934 Nepal-Bihar earthquake, occurred in a similar location to the 1988 quake. It severely damaged Kathmandu, and is thought to have caused around 10,600 deaths. 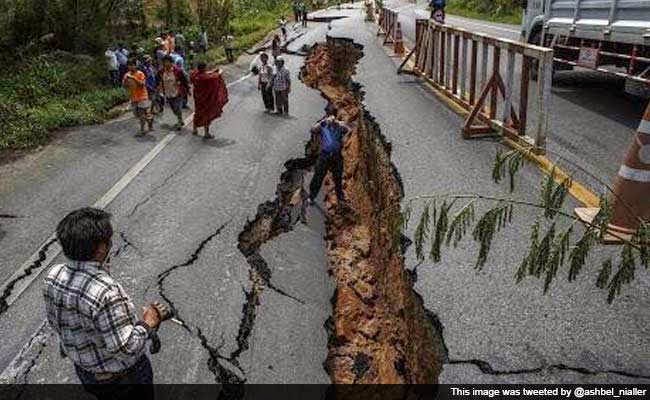 Only about 15 earthquakes a year in the world — out of 1.3 million total temblors — are magnitude-7.0 or higher, according to the U.S. Geological Survey. The devastating earthquake and resulting tsunami that hit parts of Japan in 2011, killing thousands of people, was magnitude-9.0.
An earthquake's power increases by 10 times with each increase in the number of its scale. This means Saturday's earthquake — the same magnitude as the one that hit San Francisco in 1906 — was 22 times more powerful than the 7.0 quake that devastated Haiti in 2010.