Comet impacts may have led to life on Earth 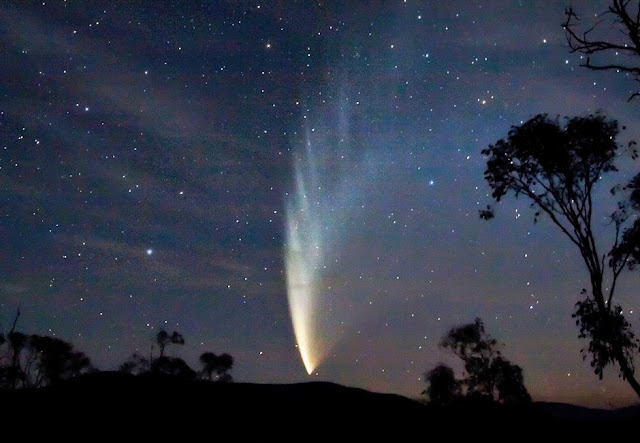 Comet impact on Earth are synonymous with great extinctions, but now research shows that early comet impact would have become a driving force to cause substantial synthesis of peptides -- the first building blocks of life. This may have implications for the genesis of life on other worlds.

Dr Haruna Sugahara, from the Japan Agency for Marine-Earth Science and Technology (JAMSTEC) in Yokahama, and Dr Koichi Mimura, from Nagoya University performed a series of experiments to mimic the conditions of comet impacts on the Early Earth at the time when life first appeared, around 4 billion years ago.
They took frozen mixtures of amino acid, water ice and silicate (forsterite) at cryogenic condition (77 K), and used a propellant gun to simulate the shock of a comet impact. After analyzing the post-impact mixture with gas chromatography, they found that some of the amino acids had joined into short peptides of up to 3 units long (tripeptides).
Based on the experimental data, the researchers were able to estimate that the amount of peptides produced would be around the same as had been thought to be produced by normal terrestrial processes (such as lighting storms or hydration and dehydration cycles).
According to Haruna Sugahara: "Our experiment showed that the cold conditions of comets at the time of the impacts were key to this synthesis, as the type of peptide formed this way are more likely to evolve to longer peptides.
This finding indicates that comet impacts almost certainly played an important role in delivering the seeds of life to the early Earth. It also opens the likelihood that we will have seen similar chemical evolution in other extraterrestrial bodies, starting with cometary-derived peptides.
Within our own solar system the icy satellites of Jupiter and Saturn, such as Europa and Enceladus are likely to have undergone a similar comet bombardment. Indeed, the NASA stardust mission has shown the presence of the amino acid glycine in comets.
The production of short peptides is the key step in the chemical evolution of complex molecules. Once the process is kick-started, then much less energy is needed to make longer chain peptides in a terrestrial, aquatic environment.
Comet impacts are normally associated with mass extinction on Earth, but this works shows that they probably helped kick-start the whole process of life in the first place."
Commenting, Professor Mark Burchell (University of Kent, UK) said: "This is a new piece of work which adds significantly to the exciting field of the origin of complex molecules on the Earth. It has long been known that ices under shock can generate and break bonds in complex organics. The detection of amino acids on comet 81P/Wild2 by the NASA Stardust mission in the last decade, and the now regular exciting news from the Rosetta mission to comet 67P/Churyumuv-Gerasimenko indicates that comets are a rich source of materials. Two key parts to this story are how complex molecules are initially generated on comets and then how they survive/evolve when the comet hits a planet like the Earth. Both of these steps can involve shocks which deliver energy to the icy body. For example, Zita Martins and colleagues recently showed how complex organic compounds can be synthesized on icy bodies via shocks. Now, building on earlier work, Dr Sughara and Dr Mimura have shown how amino acids on icy bodies can be turned into short peptide sequences, another key step along the path to life."
The above post is reprinted from materials provided by European Association of Geochemistry. Note: Materials may be edited for content and length.