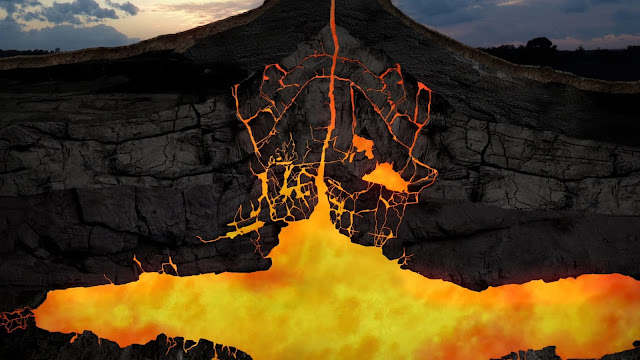 A magma consists mostly of liquid rock matter, but may contain crystals of various minerals, and may contain a gas phase that may be dissolved in the liquid or may be present as a separate gas phase.

Melting of solid rocks to form magma is controlled by three physical parameters: its temperature, pressure, and composition. Mechanisms are discussed in the entry for igneous rock.

When rocks melt they do so incrementally and gradually; most rocks are made of several minerals, all of which have different melting points, and the physical/chemical relationships controlling melting are complex. As a rock melts, its volume changes. When enough rock is melted, the small globules of melt (generally occurring in between mineral grains) link up and soften the rock. Under pressure within the earth, as little as a fraction of a percent partial melting may be sufficient to cause melt to be squeezed from its source. Melts can stay in place long enough to melt to 20% or even 35%, but rocks are rarely melted in excess of 50%, because eventually the melted rock mass becomes a crystal and melt mush that can then ascend en masse as a diapir, which may then cause further decompression melting.

The Iceland Deep Drilling Project, while drilling several 5000m holes in an attempt to harness the heat in the volcanic bedrock below the surface of Iceland, struck a pocket of magma at 2,100m. Being only the third time in recorded history that magma had been reached, IDDP decided to invest in the hole, naming it IDDP-1.

A cemented steelcase was constructed in the hole with a perforation at the bottom close to the magma. The high temperatures and pressure of the magma steam were used to generate 36MW of power, making IDDP-1 the world’s first magma-enhanced geothermal system. 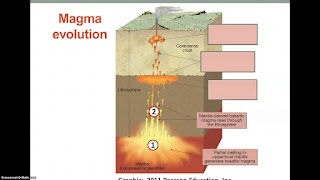 Characteristics of Magma
Types of Magma


Types of magma are determined by chemical composition of the magma. Three general types are recognized:

At depth in the Earth nearly all magmas contain gas dissolved in the liquid, but the gas forms a separate vapor phase when pressure is decreased as magma rises toward the surface.  This is similar to carbonated beverages which are bottled at high pressure. The high pressure keeps the gas in solution in the liquid, but when pressure is decreased, like when you open the can or bottle, the gas comes out of solution and forms a separate gas phase that you see as bubbles.   Gas gives magmas their explosive character, because volume of gas expands as pressure is reduced.  The composition of the gases in magma are:

The amount of gas in a magma is also related to the chemical composition of the magma.   Rhyolitic  magmas usually have higher dissolved gas contents than basaltic  magmas.

Temperature of magmas is difficult to measure (due to the danger involved), but laboratory measurement and limited field observation indicate that the eruption temperature of various magmas is as follows:

Viscosity is the resistance to flow (opposite of fluidity).  Viscosity depends on primarily on the composition of the magma, and temperature.

Thus, basaltic magmas tend to be fairly fluid (low viscosity), but their viscosity is still 10,000 to 100,0000 times more viscous than water.  Rhyolitic magmas tend to have even higher viscosity, ranging between 1 million and 100 million times more viscous than water.  (Note that solids, even though they appear solid have a viscosity, but it is very high, measured as trillions time the viscosity of water).  Viscosity is an important property in determining the eruptive behavior of magmas.

An igneous rock is any crystalline or glassy rock that forms from cooling of a magma.
A magma consists mostly of liquid rock matter, but may contain crystals of various minerals, and may contain a gas phase that may be dissolved in the liquid or may be present as a separate gas phase.