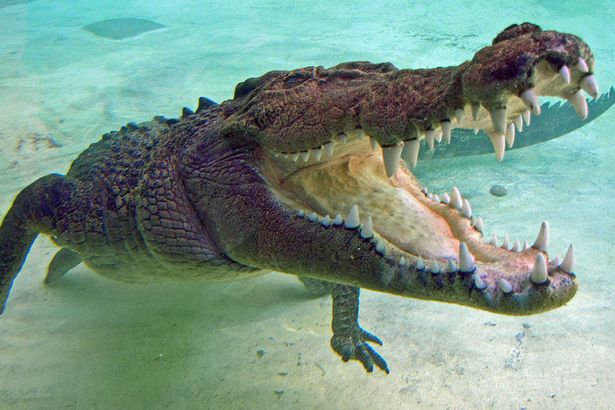 
Fluctuating sea levels and global cooling caused a significant decline in the number of crocodilian species over millions of years, according to new research. In the future, the researchers suggest that a warming world caused by global climate change may favour crocodylian diversification again.

Crocodylians include present-day species of crocodiles, alligators, caimans and gavials and their extinct ancestors. Crocodylians first appeared in the Late Cretaceous period, approximately 85 million years ago, and the 250 million year fossil record of their extinct relatives reveals a diverse evolutionary history.

Extinct crocodylians and their relatives came in all shapes and sizes, including giant land-based creatures such as Sarcosuchus, which reached around 12 metres in length and weighed up to eight metric tonnes. Crocodylians also roamed the ocean -- for example, thalattosuchians were equipped with flippers and shark-like tails to make them more agile in the sea.

Many crocodylians survived the mass extinction that wiped out almost all of the dinosaurs 66 million years ago, but only 23 species survive today, six of which are classified by the International Union for Conservation of Nature as critically endangered and a further four classified as either endangered or vulnerable.

In a new study published in Nature Communications, researchers from Imperial College London, the University of Oxford, the Smithsonian Institution and the University of Birmingham compiled a dataset of the entire known fossil record of crocodylians and their extinct relatives and analysed data about Earth's ancient climate. They wanted to explore how the group responded to past shifts in climate, to better understand how the reptiles may cope in the future.

Crocodylians are ectotherms, meaning they rely on external heat sources from the environment such as the Sun. The researchers conclude that at higher latitudes in areas we now know as Europe and America, declining temperatures had a major impact on crocodylians and their relatives.

At lower latitudes the decline of crocodylians was caused by areas on many continents becoming increasingly arid. For example, in Africa around ten million years ago, the Sahara desert was forming, replacing the vast lush wetlands in which crocodylians thrived. In South America, the rise of the Andes Mountains led to the loss of a proto-Amazonian mega wetland habitat that crocodylians lived in around five million years ago.

Marine species of crocodylians were once widespread across the oceans. The team found that fluctuations in sea levels exerted the main control over the diversity of these creatures. For example, at times when the sea level was higher it created greater diversity because it increased the size of the continental shelf, providing the right conditions near the coast for them and their prey to thrive.

Interestingly, the Cretaceous-Paleogene mass extinction event, which wiped out many other creatures on Earth nearly 66 million years ago including nearly all of the dinosaurs, had positive outcomes for the crocodylians and their extinct relatives. The team found that while several groups did go extinct, the surviving groups rapidly radiated out of their usual habitats to take advantage of territories that were now uninhabited.

In the future, the team suggest that a warming world caused by global climate change may favour crocodylian diversification again, but human activity will continue to have a major impact on their habitats.

Dr Philip Mannion, joint lead author from the Department of Earth Science and Engineering at Imperial College London, said: "Crocodylians are known by some as living fossils because they've been around since the time of the dinosaurs. Millions of years ago these creatures and their now extinct relatives thrived in a range of environments that ranged from the tropics, to northern latitudes and even deep in the ocean. However, all this changed because of changes in the climate, and crocodylians retreated to the warmer parts of the world. While they have a fearsome reputation, these creatures are vulnerable and looking back in time we've been able to determine what environmental factors had the greatest impact on them. This may help us to determine how they will cope with future changes."

The next step for the researchers will be for them to look at similar patterns in other fossil groups with long histories, such as mammals and birds to determine how past climate influenced them.
Philip D. Mannion, Roger B. J. Benson, Matthew T. Carrano, Jonathan P. Tennant, Jack Judd, Richard J. Butler. Climate constrains the evolutionary history and biodiversity of crocodylians. Nature Communications, 2015; 6: 8438 DOI: 10.1038/ncomms9438
Share to: