How long is the interval between the trigger for a volcanic eruption and the eruption itself? 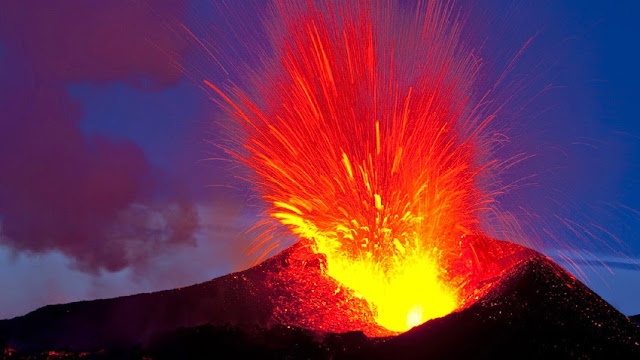 How long is the interval between the trigger for a volcanic eruption and the eruption itself? A new study by LMU volcanologists indicates that compositional variations in erupted Magmas can answer this question.

In the lithosphere beneath an active volcano the magma is never at rest. When melts with different chemical compositions come into contact, the result is often an explosive mixture: the molten rock begins to bubble, and an eruption becomes inevitable. A research team led by Professor Donald Dingwell, Director of the Department of Earth and Environmental Sciences at LMU, and Professor Diego Perugini of the University of Perugia (Italy) has now developed a model which, for the first time, allows one to estimate the time that has elapsed between the initial mixing event and the subsequent eruption. The technique has obvious application to ongoing efforts to enhance the forecasting of volcanic eruptions, as the authors demonstrate in their paper, which appears in "Nature Scientific Reports".

The 'foaming' phenomenon is due to the oversaturation of the magma mixture with gases that are released as a result of the mixing process itself. These gases in turn provide the buoyancy that causes the magma to rise. "We know that, very often, the time that elapses from the first encounter between compositionally distinct melts and the ensuing eruption is insufficient to allow complete homogenization of the mixture to occur," says Dingwell. "So the material that is ultimately extruded is still quite heterogeneous. Here, we use this heterogeneity to model the temporal pattern of the mixing process."

Simulating eruptions in the laboratory

With its unique combination of instrumentation, Dingwell's laboratory is ideally equipped to experimentally simulate the conditions of high temperature and high pressure that prevail in the interior of an active volcano. In their latest experiments they used two kinds of samples of erupted material collected in the Campi Flegrei near Naples, one of the most volcanically active areas in Europe, and compared their chemical compositions and mixing ratios. Their results showed that different chemical fractions of the component melts mixed with each other at different rates: Water, for instance, becomes uniformly distributed in mixtures very rapidly, but other substances take much longer to mix thoroughly. "On the basis of the variations in mixing ratios of particular components of the rock between the two samples of erupted material, we can estimate the duration of the period between the initiation of the mixing process and the eruption", Dingwell explains.

The results indicates that, in the Campi Flegrei, the interval between the onset of magma mixing and eruption is less than an hour – astonishingly short by comparison with previous estimates of several days. "The more studies of this kind are carried out on other volcanic systems, the sooner we should be in a position to estimate the duration of the run-up phase prior to an eruption using the variance of concentration ratios as a volcanic chronometer," says Dingwell.

The new method can also contribute to improving the monitoring of active volcanos: Once it is known from studies of erupted material how much time elapsed between initial magma mixing and a given eruption, one can retrospectively identify those events in the monitoring record that represent true precursors of the eruption. "In future, this approach could make it easier to filter the really crucial signals out of the plethora of information picked up by the monitoring system," says Dingwell. "So our model could help us to provide a realistic estimate of the lead time prior to an eruption – a parameter which is essential for the design of appropriate and practical measures to protect the public."

Provided by: Ludwig Maximilian University of Munich
Share to: