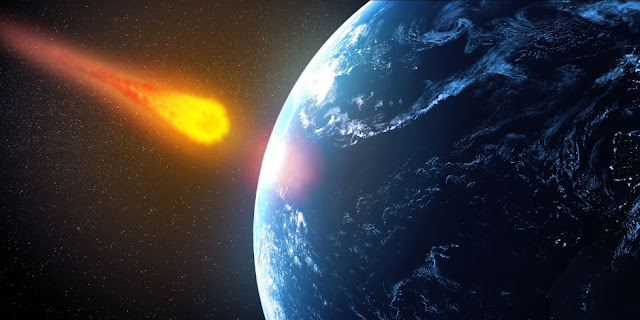 An asteroid the size of a football stadium will zoom past Earth on Halloween, in a close encounter that astronomers view as far more treat than trick.

The massive asteroid 2015 TB145 will come within 310,000 miles (500,000 kilometers) of the planet — or about 1.3 times the distance from Earth to the moon — on the afternoon of Oct. 31, just three weeks after the space rock was discovered, according to NASA. There's no threat of an impact on this pass, NASA officials said.

Astronomers estimate the diameter of 2015 TB145, which is also known as "Spooky," to be between 950 feet and 2,130 feet (290 to 650 meters). The Halloween flyby will mark the closest known encounter with such a big asteroid until August 2027, researchers said. [Potentially Dangerous Asteroids (Images)]

Scientists based at NASA's Jet Propulsion Laboratory in Pasadena, California, plan to observe 2015 TB145 on Halloween using radio dishes at the space agency's Goldstone Deep Space Communications Complex in California, as well as the Green Bank Telescope in West Virginia, and possibly the huge Arecibo Observatory in Puerto Rico.

"The flyby presents a truly outstanding scientific opportunity to study the physical properties of this object," the researchers wrote in an online observing plan.

The public will be able to track 2015 TB145 as well, thanks to the online Slooh Community Observatory and Virtual Telescope Project.

At 1 p.m. EDT (1700 GMT) on Oct. 31, Slooh will air a live webcast of the asteroid featuring time-lapse views of "Spooky," which completes one lap around the sun every three years, captured by powerful telescopes. The Virtual Telescope Project, meanwhile, will broadcast its own free show at 8 p.m. EDT on Oct. 30 (0000 GMT on Oct. 31).

"It's frightening to think an asteroid this size, approaching so close to Earth, was discovered only 21 days before its closest approach, which just happens to be on Halloween," Slooh host Paul Cox said in a statement. "If that doesn't give you the chills, nothing will."

"Slooh members are tracking the asteroid every night in order to reduce the great uncertainty of its position, size and highly unusual orbit," Cox added. "We can't afford to lose sight of an object this big, which has happened repeatedly in the past."

Scientists have discovered about 13,000 NEOs to date, out of a population that numbers in the millions.

Indeed, there are a lot of potentially dangerous space rocks zipping around out there undetected. In fact, less than 1 percent of the estimated 1 million NEOs at least 100 feet (30 m) wide have been found, NASA officials have said. But there is some good news for Earthlings: Models suggest that about 95 percent of the potential "civilization enders" — mountain-size space rocks at least 0.6 miles (1 km) across — have already been detected, and none of those are on a collision course with Earth for the foreseeable future.